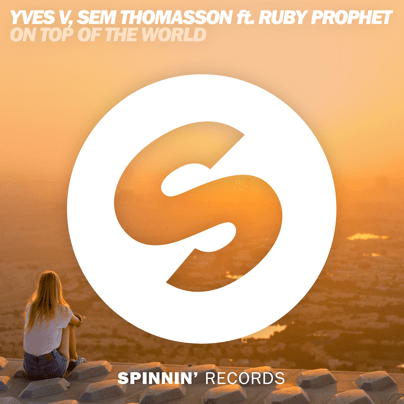 Yves V and Sem Thomasson teamed up for ‘On Top Of The World’, an amazing house tune with a featuring of the Dutch vocalist Ruby Prophet. This resulted in sweet ear candy filled with nice piano chords, exuberant drop and bouncy rhythms. An euphoric anthem that makes you want to be on top of the world!

Belgian DJ and producer Yves V is on an non stop rise, climbing an impressive 21 places to #34 last year in the DJ Mag Top 100 DJs poll, he continues to burn with the stellar magnitude of a supernova. Over the course of his career, Yves V has risen to international standing amongst his peers and global dance fans as a producer and DJ of high acclaim. Whilst his music now fills the playlists of the biggest DJs on the planet, gaining including support from heavyweights like David Guetta, Afrojack, Martin Garrix, Armin van Buuren and Radio 1’s Danny Howard and Pete Tong, Yves’s name can also be found listed on billings for some of the most prestigious parties in the world.

For his new track ‘On Top Of The World’ Yves V teams up with the fellow Belgian Sem Thomasson. The young songwriter and DJ is an established name in the Belgian electronic music scene who gained international attention a couple years back with his stunning remix work for big name artists like Flo Rida, Nely Furtado and Steve Aoki. Fast forward, Sem now can add numerous gigs around the globe, including Tomorrowland, Tomorrowworld, a soon to be taking place support act for David Guetta this years Sensation Dubai, and multiple released tracks on labels such as Big Beat Records, Universal Music, Atlantic Records and Spinnin’ Records to his name.

To complete this dream team Dutch vocalist and songwriter Ruby Prophet also teams up with Yves V and Sem Thomasson, resulting in the release of this new amazing house tune called ‘On Top Of The World’, which is out now on Spinnin’ Records.

Quotes ‘On Top Of This World’

“‘On Top Of The World’ is one of those tracks that really cuts through on the big stage. It has been such a strong record for me during my sets at shows this summer. Ruby’s voice just grabs your attention from the start and perfectly complements the energy and vibe Sem and myself put into the record.” – Yves V

"I'm really happy I teamed up with Yves V on On Top Of The World. We worked really long and hard on the track just to make it perfect in every detail. When Yves premiered the track on the mainstage of Tomorrowland we received so many positive reactions that now it finally gets out, we feel even more On Top Of The World." – Sem Thomasson

"Writing this song for Yves & Sem Thomasson was super awesome. Remembered the first time i saw Yves V playing ‘On Top Of The World’ at Tomorrowland and it gave me goosebumps. Proud to be part of this collaboration." – Ruby Prophet

‘On Top Of The World’ is already supported by Dimitri Vegas & Like Mike, Nicky Romero, Ummet Ozcan, NERVO, Quintino and more.