One Week to Caprices Festival 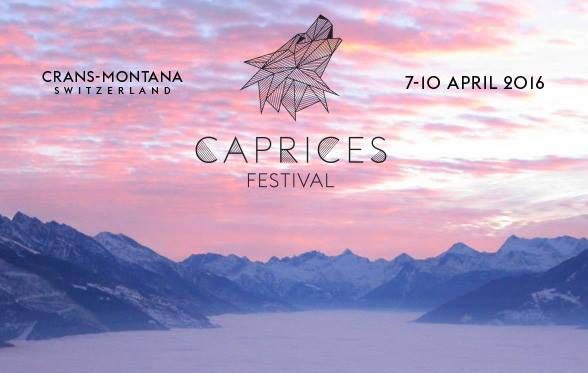 One Week to Caprices Festival

The 13th edition of Caprices kicks off in a week. The biggest names in electronic music, from Maceo Plex to Ricardo Villalobos, not forgetting KiNK, Âme, Rødhåd or of course Sven Väth, will be in Crans-Montana from the 7th to 10th of April for this unmissable clubbers get-together.

Bringing together today’s hotshots and the very best of today’s avant-garde, Caprices will make the Valais ski station really jump for four days.

For the opening evening on Thursday 7th April, Caprices has put together an impressive line up at Moon. Installed deliberately at the foot of the pistes this year so as to reduce the time taken between the two principal festival venues, the room will rock in turn with the electronic punk vinyls of Nina Kraviz, the minimalist expert Magda, the #1 of top 20 live acts from the Resident Advisor site KiNK, one of the leaders of the Italian scene DJ Tennis and the great new Swiss duo Kūn**.** « Not an evening to be missed, declared Maxime Léonard, the director of Caprices. It’s the first festival with our new logo. It’s the first evening of the Festival. We wanted to present a line up of acts at the very top of their game and these five will really get Moon going, promised the director. » Other acts lined up for Moon over the following days : Tale of Us, Âme, Rødhåd, Recondite, Mind Against, Michel Cleis, Väth, Maceo Plex, Eats Everything, Ilario Alicante, Tim Green, Adolpho & Franky, Nicolas Duvoisin et Alci.

The other major venue is at 2208m, on the terrace where the Violettes telecabine arrives. Having become the symbol of Caprices, the MDRNTY stage invites you to buzz to the sound of Jamie Jones, The Martinez Brothers, Nastia, Ricardo Villalobos, Raresh or Preslea, all set against the unique and breathtaking views that the Valaisan station offers. After the dance floor of MDRNTY gets going with this line-up on the 8th and 9th April, on Sunday the 10th Caprices has asked Guy Gerber, Mathew Johnson, Stimming et Ryan Crosson to animate the mountain peaks a day which will also be one of the last ski afternoons of the season. « this will be the last chance of the season to take in this exceptional view whilst partying to the very latest in electronic music , explains Maxime Léonard. Unforgettable. »

Strengthened by the success of previous festivals OFF, this year Caprices has chosen again to let the public enjoy this third offering 100% free. Presented by Charles Favres’ son, this happening for all age groups will take place over the week-ends of the 2-3 and 8-9 of April in the centre of Crans-Montana in the company of DJs and the live group Igor Blaska, Vkee, Macao and loads of others.

Caprices – four days of festival over three different venues, at the top and the bottom of the pistes. It’s a gigantic electronic line-up in an alpine environment of incredible beauty for an unforgettable experience. It’s from the 7th to the 10th April 2016 at Crans-Montana. Don’t miss it!

Caprices is a four-day festival that takes place on three different stages positioned on both the top and bottom of the slopes. This is set to be a tremendous electronic line up against the backdrop of a strikingly beautiful Alpine setting that promises to be a unique experience. From 7 to 10 April 2016 in Crans-Montana; don’t miss it.

About Caprices Festival:
Initiated in 2003, the first edition of Caprices Festival came in 2004 with the idea to bring people and artists together in a dreamlike location in the Swiss Alps: Crans-Montana ski station. With artists like Björk, Portishead, Gorillaz performing next to the ski slopes, Caprices Festival quickly became a tremendous event that draw people from all over the world. In 2009, Caprices carefully conceived the first electronic event on the Swiss Alps slopes. Named [email protected], this event instantly became a huge success among avant-garde electronic dance community and reached a broader crowd shortly after. Shifting from a mainstream multi-type of music programming to a cutting-edge electronic exclusive cast last year, Caprices Festival made a bold move showing its strong dedication to the community. The artistic and commercial successes of the 12th edition of Caprices Festival have pushed the 4-day event to the top-of-pile. This year, on April 7th through April 10th, with a brand new key visual, a truly outstanding electronic lineup, an operational excellence, a creative mindset and one of the finest mountain line of the Alps, Caprices Festival is set to be an unmissable party.