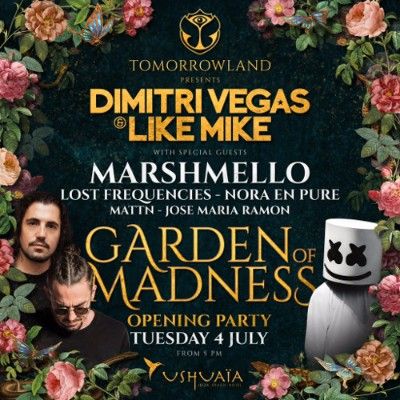 Tomorrowland Presents Dimitri Vegas & Like Mike ‘Garden of Madness’ at the world renowned open-air beach club Ushuaïa Ibiza every Tuesday throughout the summer season. With the official opening night starting on Tuesday 4th July at 5pm (CEST), fans will get an opportunity to experience a summer of musical madness like nothing the beautiful island of Ibiza has seen before!

Joining the Belgium brothers for the official opening fiesta will be Lost Frequencies, Nora En Pure, Smash the House’s MATTN, Ibiza Global Radio’s Jose Maria Ramon, with the much talked about Marshmello also making a headline appearance. The brothers will also be revealing another special guest soon! Fans will also be treated to the full line-up in the coming week.

Speaking about their first ever Ushuaïa Ibiza residency Dimitri Vegas & Like Mike said: “Anyone who has ever been to Tomorrowland will know what to expect from our sets and the festival team’s creativity! And anyone who has ever been to Ushuaïa Ibiza will also know the attention to detail that goes into one of their Ibiza parties. So what we’re going to be bring to the island this summer is something that no one will be expecting! Together we’re going to create something more surreal, more insane and more exciting than anything ever hosted on the island before!”

Whilst Ushuaïa Ibiza is known for its exuberance in party creations and since its launch back in 2011 has treated the beautiful island of Ibiza to some of its finest musical moments. The collaboration with the production team from Tomorrowland, who have literally redefined the electronic music festival landscape, is a partnership that will bring to the renowned beach club destination a custom-built stage that will deliver an incredible extravaganza for those lucky enough to experience it.

Responsible for the smashing the biggest festival’s main stage each year, Dimitri Vegas & Like Mike became an inherent component of its phenomenal appeal and have in turn earned legions of fans around the globe. Their phenomenal global reach has seen them expand their ‘Bringing The Madness’ arena show into an 84,000 person event that sells out in minutes, play every major dance music festival going, become two of Ibiza’s most popular DJ’s over the past few years, collaborate with the likes of Ne-Yo, Steve Aoki, Diplo, David Guetta and more recently Hans Zimmer (for an official Pirates of the Caribbean track), and become the first ever duo to be named World #1 DJ in the DJ Mag Top 100 Poll.