Exploring the idea of rap as a form of intellectual art, radical hip-hop artist and storyteller Otis Mensah releases his debut EP Rap Poetics – a six track project challenging and breaking down the white-washed elitism of the art world.

Otis’ work reads like a stream of consciousness, documenting journeys of thought as he manoeuvres expertly throughout the project. Valuing art as a fundamental form of activism, Otis is opening up an important dialogue between himself and the ruling establishment, positioning emotional vulnerability at its core.

Lead single ‘Grand Finale Funeral Show’ tackles the pressures of the art world – to continue to create, design and compose. Otis documents these journeys of thought with artful introspection, his experimental hip-hop rippling with themes of displacement and artistic vulnerability.

“The bearer of bad news, Otis Mensah, cleans his conscience for one last time. Determined to unearth pretence, ‘Grand Finale Funeral Show’ is a double-sided mirror”.

“From the pews, it reflects the unhealthy adjustments that people make to fit in a hierarchical and materialistic society. On the stage, the mirror sees Mensah face his final showpiece: a lifetime of juggling the pressures and expectations of a contemporary artist.”

Recently making his debut book premiere with SAFE METAMORPHOSIS!!, a collection of poems and philosophical ideas exploring the voice of unspoken trauma, Rap Poetics is a continuation of this earnest human expression, taking rap as an art-form in its own right – one that is raw and impassioned. 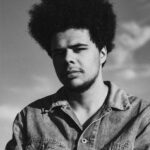