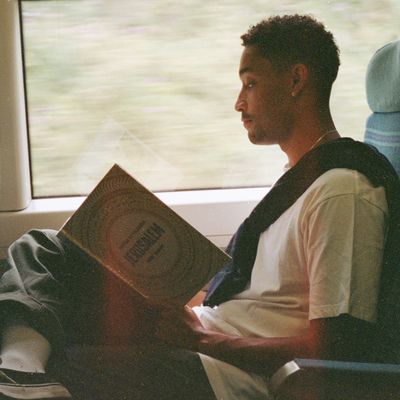 Today, Loyle Carner returns after over 18 months with his brand new single and video for 'Ottolenghi', co-written and featuring Jordan Rakei, released via AMF Records.

'Ottolenghi' is named after, and loosely inspired by, the pioneering chef Yotam Ottolenghi. The song came to life when Loyle was quizzed by a family on a commuter train about the "Bible" he was reading, which was in fact the aforementioned chef's cookbook 'Jerusalem'.

The video was directed by multiple award winning director Oscar Hudson (Pulse Films) and follows Loyle and family on a train journey in to the surreal. The song's title comes to life with the subtle cameo of Yotam Ottolenghi himself.

Alongside this human insight sit some distinctly personal references, including a saying from his Grandad and a nod to one of his favourite Roots Manuva songs 'Dreamy Days'. Armed with this, Loyle soars serenely over soulful hooks, laid back grooves and Rakei's jazz-inflected tones on the chorus.

Loyle first appeared on the scene back in 2014, with his debut EP 'A Little Late',  he followed that up with his BRIT (Best Male, Best Newcomer) and Mercury Prizenominated, top 20 debut 'Yesterday's Gone', The bedrock of honest and raw sentimentality that you hear on 'Yesterday's Gone' has left an inextinguishable mark on music in general and UK Hip Hop in particular, standing out as an ageless, bulletproof debut.

Since the release of 'Yesterday's Gone' Loyle has toured the world, started a cooking school for kids with ADHD, created an award winning, bespoke rap for the Champions League final, campaigned for men's mental health and fronted a worldwide YSL campaign. By anyone's standards, Loyle has already achieved a lot. Join the ride to see where else this prodigiously gifted voice of a generation can take us.