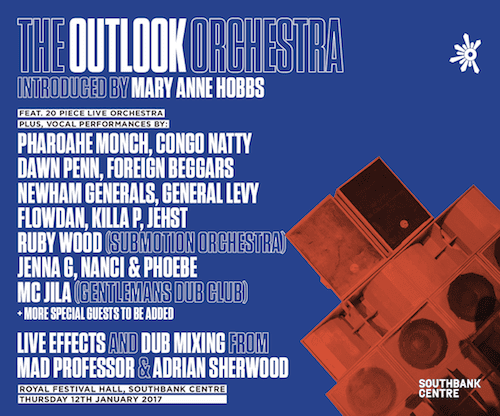 For any fan of Sound System culture and it’s heritage, Outlook Orchestra is a not to be missed show debuting on Jan 12th at London’s Southbank Centre. A collaboration between Outlook Festival and the Southbank team, Outlook Orchestra celebrates the rich history, artists and systems at the heart of the movement. With just a week to go it’s the last chance get hold of tickets from just £26.50, and with Pharoahe Monch, Congo Natty, Dawn Penn, Newham Generals, General Levy, Flowdan all on board, plus live effects and dub mixing from Mad Professor and Adrian Sherwood, it’s set to be a monumental affair. What better way to kick those January blues?

On top of this, find UK rapper and YNR Record’s boss Jehst, Submotion Orchestra’s Ruby Wood, Jenna G, Nanci & Phoebe, Gentleman's Dub Club’s MC Jila and much more in store. All performances will be have live effects and dub mixing by dub engineer Mad Professor and esteemed producer Adrian Sherwood, mixing past sounds with current flavours to nod to sound system culture’s roots, and the influence it’s had on other genres. For a taster of what to expect, check this Outlook Orchestra mix by The Tuesday Club’s Andy H : http://bit.ly/2iBAzpL