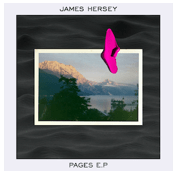 We live in a world dominated by social media, instant communication and snap judgements, and it's how this new instant gratification can co-exist with instinctive human emotions that Hersey shines a light on. Recorded in just ten days, Hersey calls the songs in 'Pages' EP a "collection of experiences over time", which showcases a deeply personal and emotive side to the gifted musician.

James says: "The 'Pages' EP is about love in a time unlike any other. It's about conveying real, analogue emotions in a digital age. I don't want to say we've been completely overrun by technology, but certainly a lot of our natural instincts are being exponentially replaced. In a way, our souls are being transplanted, and it feels to me like the best time to re-evaluate our individual roles, and collectively contribute to a better future for everyone."

'Coming Over' is, for many, the track that launched Hersey's name to international recognition after dance heavyweights Filous, ?Kygo & Dillon Francis heard the original and were compelled to rework it, launching it to over 129 million streams globally. The release of the strikingly catchy summer-tinged original promises to captivate fans once more, showcasing Hersey's extraordinary ability to craft epic yet delicate hooks with his bold, unflinching lyrical stamp.

Hersey has accumulated an astonishing 295 million streams to date with his music. Lead track 'Miss You' saw James named one of Annie Mac's 'New Names' late last year, amassing over 77 million streams alone since its debut this past autumn and immediately shooting up the Spotify Global Charts in 10 countries including the UK and U.S. After receiving a stellar remix treatment from HONNE the track continued its trajectory up to #1 and #2 on the Hype Machine charts, before second release 'Everyone's Talking' followed and saw Hersey's plaudits from press continue: ?

Currently based in Berlin, but born in Vienna, Hersey's deep passion and understanding for both? lyrics and melody is seeing him quickly cut through as one of the brightest breakthrough talents in 2017.