Dutch hardcore legend Paul Elstak and Psycho Boys Club teamed up for their single “Bull Kick,” the newest release from Yellow Claw‘s Barong Family imprint. “Bull Kick” should come with a warning label: not for the faint of heart. The track is a unique fusion of hardcore, bass, psytrance, and ravey techno, evoking memories of early rave days in clandestine underground warehouses. Elstak and Psycho Boys Club deliver rapid-fire kickdrums and distorted synths, making the track as hard-hitting as it can possibly be. “Bull Kick” follows Psycho Boys Club duo’s earlier “Over You,” released on Spinnin’ Records Asia, Barong Family‘s debut EP “Chaos Underground,” as well as Paul Elstak‘s singles, such as “Beyond Your Control” and “Soldaat.”

In the hardcore scene, Paul Elstak needs no introduction. His career began in 1987 and has led to a long resume of both commercial and underground hits; he launched his label Rotterdam Records in 1992 and released radio-friendly singles “Life Is Like A Dance,” “Luv U More,” “Don’t Leave Me Alone,” “The Promised Land“, “Rave On” and “Rainbow In The Sky,” all of which made the Dutch Top 40 in the 1990s. The next decade found Elstak pivoting to a harder style of music as he evolved as a producer. In 2010, he produced the title track for the movie “New Kids Turbo,” which led to him winning a Rembrandt Award for Best Title Song for the Gold-certified track in 2011. More recently, in 2017, Elstak released hits “Kind Van De Duivel” (“Child of the Devil“) and “Engeltje” (“Little Angel“) with rapper Jebroer and Dr. Phunk, both of which went collectively 5x Platinum in The Netherlands and Gold in Belgium.

DJs and producers Juyen Sebulba and Stoltenhoff teamed up for their Psycho Boys Club project in 2019, complementing their own successful careers as solo artists. Juyen previously released on Musical Freedom, Mad Decent, and Mixmash, while Stoltenhoff collaborated with Tiësto on “Lose Control,” SLANDER on “We Out” and remixed Yellow Claw. Together as Psycho Boys Club, their hard-hitting style has found a home on Barong Family, where they’ve continued to build their repertoire with a string of well-received releases. 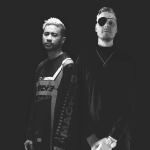