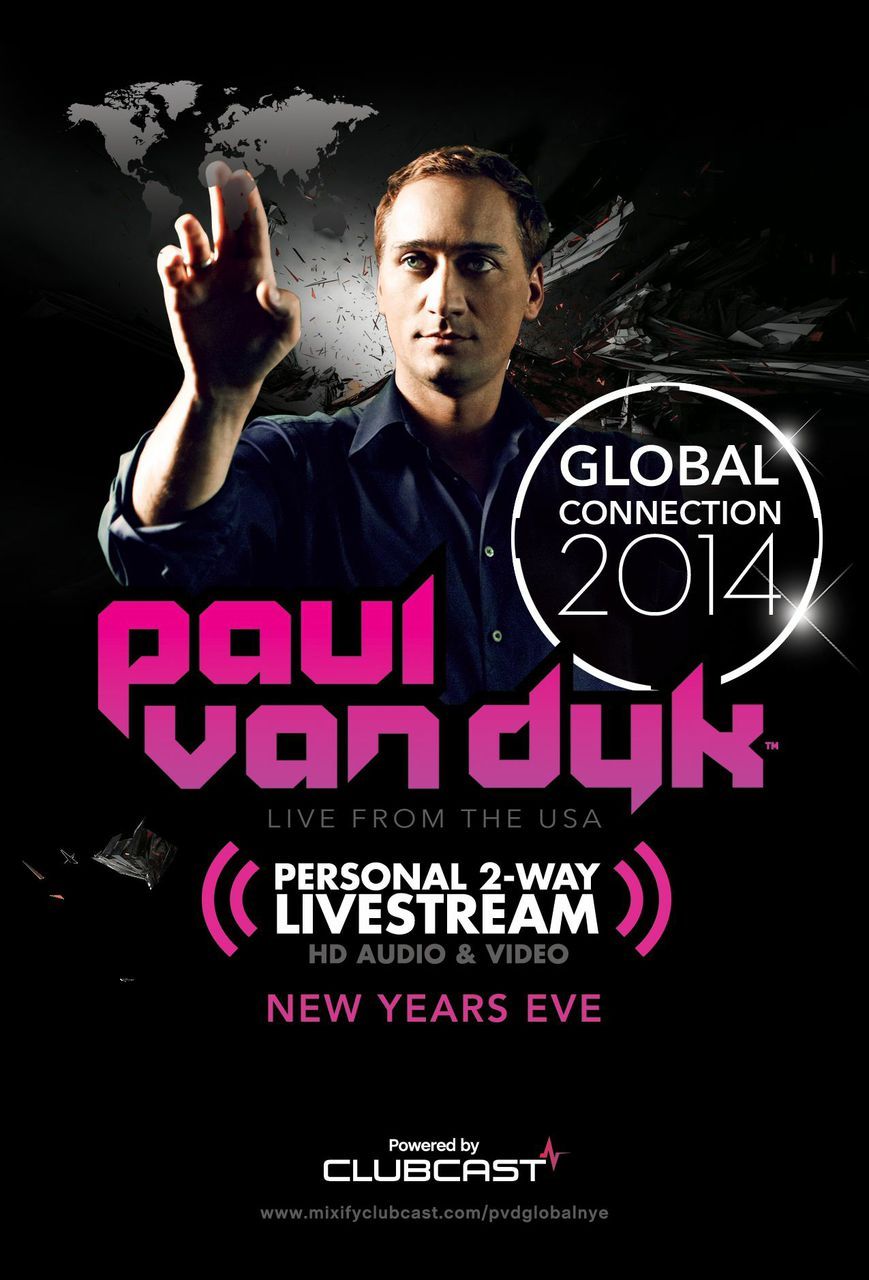 Throughout his long career, internationally-acclaimed electronic musician PAUL VAN DYK has always been ahead of the curve. To ring in 2015, PvD will be the first to utilize Mixify’s new two-way live streaming Clubcast technology to perform personal sets to be streamed live into venues throughout Australia, Asia, Africa, Europe, South America and North America, all in a single 24-hour period. Global Connection 2014 will be an unprecedented event.

The electronic music legend has teamed up with Mixify (www.mixify.com – the premier interactive live-streaming platform connecting DJs and fans around the world) to deliver the first ever globe-circling New Year’s Eve party. On December 31, through Mixify’s Clubcast technology, PAUL VAN DYK will broadcast live to thousands of fans gathered in venues, spread across the world.

Says PAUL VAN DYK, “The way we produce music, the way we release music and now the way every single one of us experiences live music has, to a huge degree, changed. Reflecting that change will start this New Year’s Eve with my first ever Clubcast. I can now reach audiences in various parts of the world in a very special way. On New Years Eve this means uniting people, a GLOBAL CONNECTION, through music & clubbing on six continents for the first time. Wherever you find yourself in the world this NYE, I hope you can join us for this unique experience.”

“Clubcast is about powering memorable experiences, creating access, and enabling DJs to connect with their fans around the world despite distance and other travel barriers,” added David Moricca, founder and CEO of Mixify. “We’re thrilled to partner with a DJ legend like Paul van Dyk to create the first-ever global New Years party through Clubcast.

Since its launch in June 2014, Mixify has powered Clubcasts in over 30 cities around the world, providing access to top artists including Paul van Dyk, Laidback Luke, Steve Aoki and Tommy Trash among others – but this is the first time music fans across the world will have the opportunity to not just party with a legendary DJ, but also be part of a ground-breaking global event and conversation.”

About Paul van Dyk: Paul van Dyk has dominated electronic music charts and DJ polls for more than 15 years. He has twice been ranked the world’s #1 in DJ Magazine’s Top 100 DJ poll – a feat few have achieved, and in 2013 was aggregated as the poll’s all-time #1. Paul has performed before audiences in excess of a million people, including shows at the Love Parade festival in Berlin and New Year’s Eve in Rio de Janeiro.

He has sold millions of albums worldwide and was nominated for a GRAMMY in 2003 for Best Dance/Electronic Album for Reflections. As a recording artist, he has collaborated with a broad spectrum of talent from David Byrne to St. Etienne. As a remixer, he has worked with such artists as Madonna, Justin Timberlake, Depeche Mode, U2, and Linkin Park, as well as Hans Zimmer on the ‘The Dark Knight’ theme song. In addition, Paul composed the score for EA Games Grand Slam Tennis, won the Mexican Oscar for Best Original Score for “Zurdo” and has created music for a global advertising campaigns on behalf of Motorola and the announcement tones for Berlin’s new international airport. In the spring of 2015 he will release his next album The Politics of Dancing 3 (Ultra Music). His most recent single “Only In A Dream” with Jessus & Adham Ashraf featuring Tricia McTeague is out now.

In addition to his music, Paul has long been politically and socially active, participating in both the Rock and Spin The Vote movements and the European Union campaigns. In 2009, he received Berlin’s Medal of Honor in recognition for his charity work dedicated to helping underprivileged children.

About Mixify: Founded in 2012 with the mission to make live events more accessible and affordable, Mixify has since become the premiere interactive livestreaming platform that connects artists and fans around the world. Mixify’s proprietary technology allows artists to share their music live on Mixify.com, or to broadcast live from exclusive studios into any venue around the world using Clubcast, a two-way HD livestreaming technology. Through HD audio and video, Clubcast creates a completely immersive experience, and the two-way livestream enables artists and fans the ability to party together even while miles apart. Mixify is privately held and headquartered in Brooklyn, NY, with offices in Los Angeles, CA and Sydney, Australia.