Pharien, is on the up and up. Leading the dance scene in Japan at the tender age of 21, Pharien is an artist to keep a close eye on. Interlaced with his signature dream-like chord progressions, ‘Say It Better’ will transport your head into the clouds. Released on Spinnin’ Asia, the young, rising star is honing his craft.

“So excited to share this one with you! Sarah and I have been working on this track since last year so I’m curious to know what you guys think.” – says Pharien

About ‘Say It Better’

Making his debut into the world of EDM at merely 17, Pharien is the first Japanese artist to be signed to Spinnin’ Records. At the even younger age of 3, the Japanese DJ/Producer’s intrigue for music blossomed with the classical soundtracks played by his mother. It didn’t take long for him to become fixated on experimenting with the piano and guitar, simultaneously artists such as Knife Party, Martin Garrix and Avicii becoming his inspiration.

Finding his trademark sound, as with many artists, can be a bumpy process of trial and error. Once Pharien discovered future trance, that lightbulb, eureka moment clicked, leading him to his groove that listeners have come to adore. July 2019 marked a pinnacle moment for the up-and-coming star with the release of his biggest track to-date ‘Tell Me The Truth’.  The release was immediately supported by artists of legendary stature such as Martin Garrix, Don Diablo, Hardwell, Borgeous, Lucas &Steve, Mike Williams and more.

Pharien’s weapon is his dreamy chord progression combined with a chill, laid-back atmosphere that derives from his music experience as a child. Exceeding all expectations, Pharien is the first DJ/Producer to achieve an international status. Now, undoubtley he is a pioneer of the dance scene in Japan. Keep your eyes peeled for what is sure to be a bright, bright future. 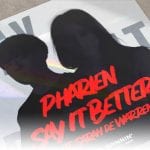