Phonox: a new nightclub for London… 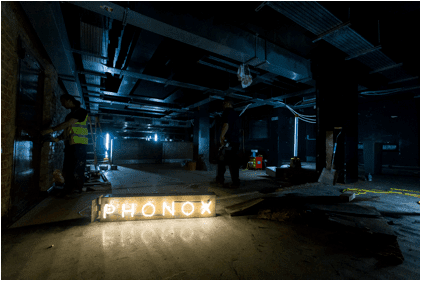 Phonox: a new nightclub for London…

Launching this September comes a new nightclub for London, Phonox.

In an almost suffocating time for UK clubbers who’ve become accustomed to the all-too-common story of club closures, Phonox stands as a fresh opportunity to champion what we cherish about our city’s nightlife.

At the height of our expectations, we want Phonox to grow into a community of like-minded clubbers sharing in an experience week in, week out.

Stripping back the current model to clubbing’s raw ideals; our dance floor will be fuelled by emotion over social media, a meeting-point for those who’ll be with us over the coming years, not just one night – a notion that extends to the programming.

Phonox is about simplicity: one dance floor, one great system and one DJ all night. While the Friday night bookings will see a schedule of DJs take on all night sets (a task which separates the incredibly talented DJs from the rest), Saturday will be given to the club’s brand new resident (announced Monday 3rd August). A relatively new name to the circuit, we’ve given him a weekly platform to build something truly organic. On Saturday nights, we won’t be about the big names, we’ll be celebrating what’s really important about club music – something this residency will emphasize.

Phonox will be led by director of XOYO and The Nest, Andy Peyton. Well versed in what it takes to run a club and throw great parties, Andy’s approach to Phonox has been 15 years in the making – special attention has been paid to every level of the club’s being.

“We’ve got a very specific plan and set rules for ourselves to make the club into the place we want it to be: a dance floor full of people with smiles on their faces, not facing the DJ with camera phones at the ready, but enjoying the music for it’s own sake” says Andy.

Encouraging an open-minded network of people who value community and nightlife, Phonox will be open as a bar from 6pm every day making the transition into a ‘nightclub’ as the evening grows later.

Launch weekend and full line-up information will be released on Monday 3 August. We can’t wait to get started…