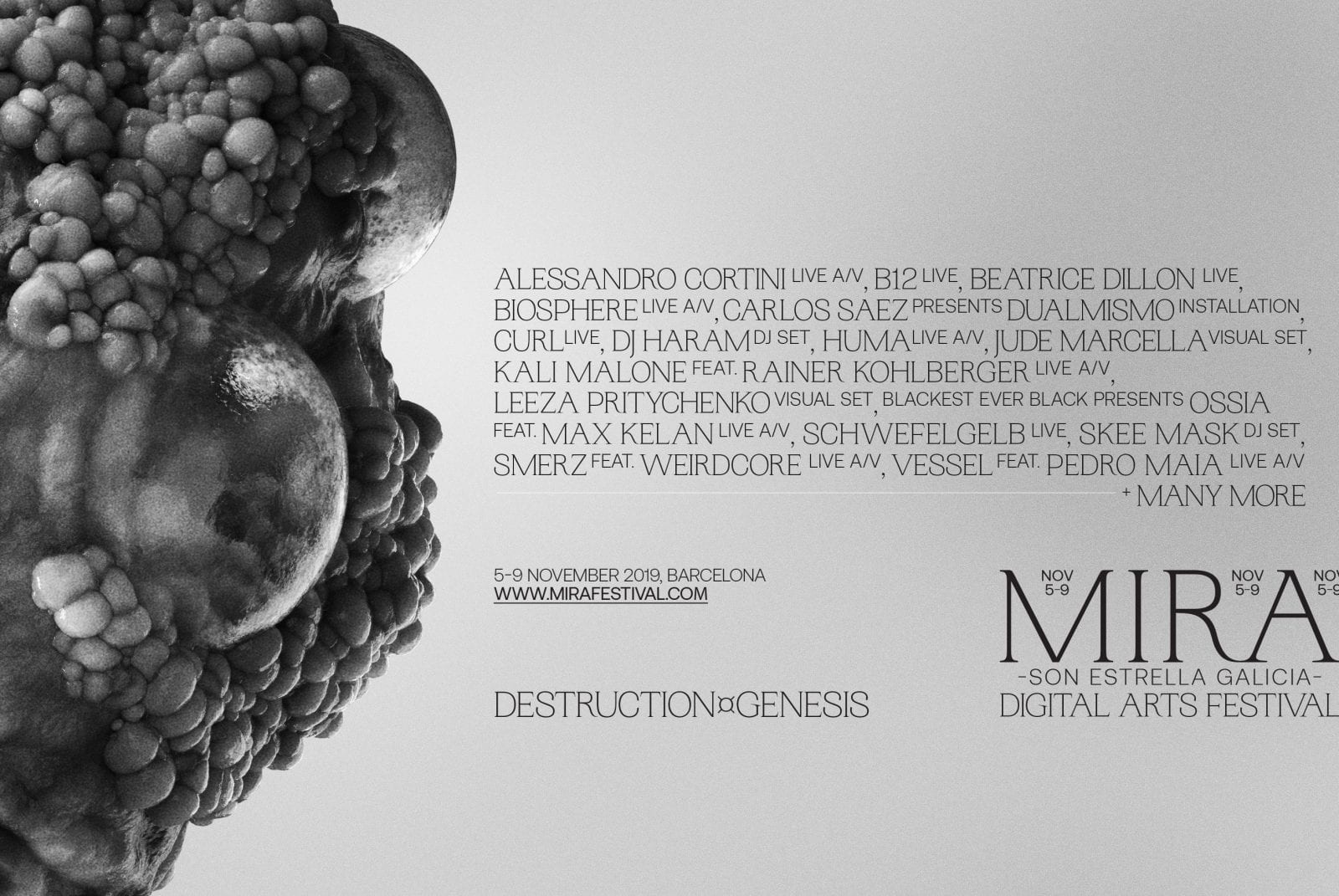 Today, pioneering music and digital arts festival MIRA ¤ SON Estrella Galicia announce the first wave of their Barcelona line up taking place from 5-9th November 2019. Standing at the front of the leftfield music and arts scene in Barcelona, MIRA invites a whole host of international genre spanning artists across multiple venues and spaces in the city. In celebration of the announcement, MIRA is offering a number of Early Bird Festival Passes at only €55 here >>

Encompassing a theme between music and art, this year MIRA takes the direction of protest – exploring the importance of art and technology as instruments of protest and how they reshape the future and demand transformation. MIRA have commissioned a number of world debut shows and collaborations especially for the festival – do not miss this.

Heading back to Barcelona, 15 years since performing in the city is legendary ambient producer Biosphere who returns with a premiere of his new A/V show. Returning for another year is synth hero Alessandro Cortini who will be back at the festival for with a brand new A/V show and look into new his new evocative music.

Composer, producer and sound alchemist Vessel will head to MIRA to present his latest album Queen of Golden Dogs, recently released on key label Tri Angle. He will partner with long term collaborator Pedro Maia, a leading contemporary visual artist, known for his innovative use of analogue film techniques.

The London-based collective and label CURL, formed by Mica Levi, Coby Sey, and Brother May, will make their MIRA debut along with a number of special guests who will showcase an interdisciplinary performative show. This certainly is not one to miss.

London’s Beatrice Dillon, known for her ambitious DJ will be present her brand new album at MIRA whilst legendary duo B12, pioneers of British techno and IDM will present their ground-breaking live show, reinterpreting their vast body of work and masterfully mixing the classic with the new.

Commissioned by MIRA especially for the festival Norwegian duo Smerz will head to Barcelona to perform their debut album Have Fun accompanied by renowned video designer Weirdcore, who has collaborated with Aphex Twin, M.I.A. or Simian Mobile Disco. This is a one off performance exclusive to the festival, be sure to catch this unique collaboration.

Blurring the boundaries between breakbeat and IDM, MIRA welcomes Skee Mask to the festival who will be accompanied by an exclusive visual set by artist Jude Marcella.

MIRA have commissioned artist Carlos Sáez to present Dualmismo: an immersive and large-format that toys with the real and the virtual, challenging Platonic dualism and testing our patterns of perception through the synchronisation of different light, video and sound effects. The installation highlights how human beings adapt to new levels of virtuality and assume them as reality, two concepts that are becoming increasingly difficult to dissociate.

Acting as an incubator for genre bending music and arts in Barcelona, MIRA will invite a whole host of other musicians and artists, who are pushing the fringes of the practice forward including DJ Haram, Schwefelgelb, Ossia, Max Kelan, Huma and many more, full line up is below. Hosting a full conference and further installations at a later date, keep an eye out for another wave of the line up with artist, 360 fulldome experiences and installations added later in the year.

With Barcelona easily accessible from Europe and beyond, with flights starting from £30 from London, MIRA is the perfect getaway for those with a musically curious mind. With a vast range of accommodation choices to suit style, size or budget there will be something to suit everyone. More information on this can be found on the MIRA website