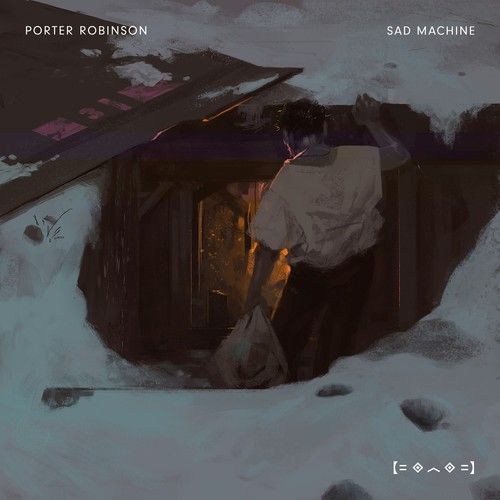 The wait for Porter Robinson’s eagerly anticipated debut album ‘worlds’ will soon be over. Releasing via Virgin EMI on August 11th, the album is a cinematic excursion that blends Porter’s technological prowess with his love of evocative melody. On ‘worlds’ Porter declares a beautifully loud-yet-vintage aesthetic that stands in stark contrast to the formulaic club-ready music dominating the electronic genre today.

The product of more than two years of work, ‘worlds’ sees Porter realizing an artistic vision that is entirely new, and entirely his own. This new sound is evident in the two songs from ‘worlds’ revealed so far; lead single “Sea of Voices” and new single “Sad Machine” released today.

Where “Sea of Voices” gauzy and ethereal atmospherics provided the first indication of Porter’s new sonic direction, ‘Sad Machine’ furthers Porter’s sonic mission statement. With its melodic vocal interplay and sentimental-meets-synthetic production detail, the track provides additional insight into the signature sound of ‘worlds’. It is also the first time Porter has used his own vocals on a track – in a duet with a robot no less.

Porter explains: “I’d used synthesized voices (vocaloid, for those in the know) as the vocals for several of the songs on worlds, and then the idea of a duet between a lonely robot girl and the human boy who encounters her occurred to me. I didn’t have much time before I had to turn in the entire album, so I just sang the male parts. I wanted something that felt distantly sad, a little cute, surreal, hopeful, and maybe somehow evocative of fiction? It’s also peppered with cheap little general-midi interludes that sound like n64 games or old pc games – those are so nostalgic to me and they really helped the whole thing feel all fantastical and fictional.”

‘Sad Machine’ is a natural progression following ‘Sea of Voices’, which was leaked to Porter’s fans via Twitter during the Oscars earlier this year. The track trended #1 on Facebook as the awards show aired live that evening, eliciting comparisons to Sigur Rós, M83, and Orbital from fans and media alike. ‘Sea of Voices’ shot to #2 on the iTunes electronic chart, #5 on HypeM, #5 on Spotify’s viral chart, and saw more than half-a-million Soundcloud streams in a single day (it has long since surpassed the 1 million mark).