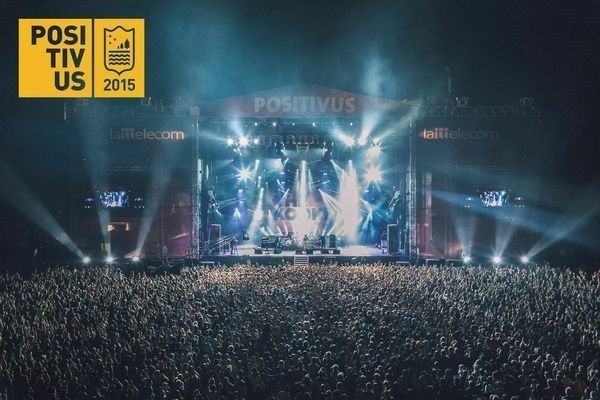 Taking place in the picturesque coastal town of Salacgriva in Latvia and surrounded by idyllic woodland, Positivus is a music festival featuring a diverse range of international chart toppers and underground emerging talent as well as offering festival goers a variety of activities and plenty to explore across the three-day event.

Attracting a record number of international visitors in 2014, with one day completely sold out, the 8th edition in 2015 promises to be even bigger and better.

“While we’re still basking in the unforgettable memories of this summer’s festival, the next one is approaching faster than we might expect. We’ve created a new – and in our opinion – a more engaging way to sell the first tickets for next year’s festival. For three days only, exclusively at positivusfestival.com you can purchase a three-day festival ticket for only 54 EUR, or book the ticket by depositing 10 EUR and submitting the remaining sum up until November 30th. General ticket sales will start from October 16th and the ticket price will increase up to 60 EUR,” explains Positivus Festival organiser ?irts Majors.

To take advantage of the exclusive ticket offer and new deposit scheme, simply register for the festival newsletter positivusfestival.com/newsletter) before October 15th and receive an e-mail with the unique code. Then from 9AM on October 16th, simply enter the received code on the positivusfestival.com/tickets web page and a 10 EUR coupon will be received to book the lowest-price tickets for the festival. The full payment can be made later on – up until November 30th.

Festival goers will also have the chance to purchase up to four three-day festival tickets with or without camping for a special price of 60 EUR and 54 EUR respectively. Ticket pre-sale and booking will be available only on the festival’s website. Using the same code, a 25% discount on all Positivus 2014 T-shirts is also on offer up until December 31st.

The 2014. Positivus gathered the biggest number of foreign visitors in its history – nearly 9000, including guests not only from the Baltics and Scandinavia, but also Germany, United Kingdom, Italy, The Netherlands and beyond. During the three day event, the eight festival stages hosted more than 100 artists including world renowned artists such as Kraftwerk, The Kooks, Ellie Goulding, King Charles, Elbow, Future Islands, Bastille, Temples, The 1975 and many more.