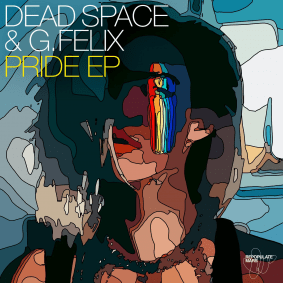 Hailing from Orlando, Florida, Dead Space releases have graced labels such as Toolroom, Bodhi Collective, Erase Records, Glasgow Underground and La Pera, whilst receiving regular support from the upper echelons of house music like Claude VonStroke, Chus & Ceballos and Mark Knight. Meanwhile, Brazilian producer G. Felix has dropped two releases on Kadence Records that have become staples in the sets of Eli Brown, Marco Carola, Joseph Capriati, Erick Morillo, and Pete Tong among many others. Together they debut on Repopulate Mars following releases by Lee Foss, Latmun and Eli Brown.

‘Pride’ sets the tone of the release with a pulsating bassline, choppy vocal loops and delayed siren-like effects before thumping subs, resonant vox cuts and and underpinning synth blips come into play in ‘Don’t You Stop’. Rounding things off, organic percussion, a rumbling low end and off-kilter synths forge ‘Drunk Church’, bringing everything to a well refined close.