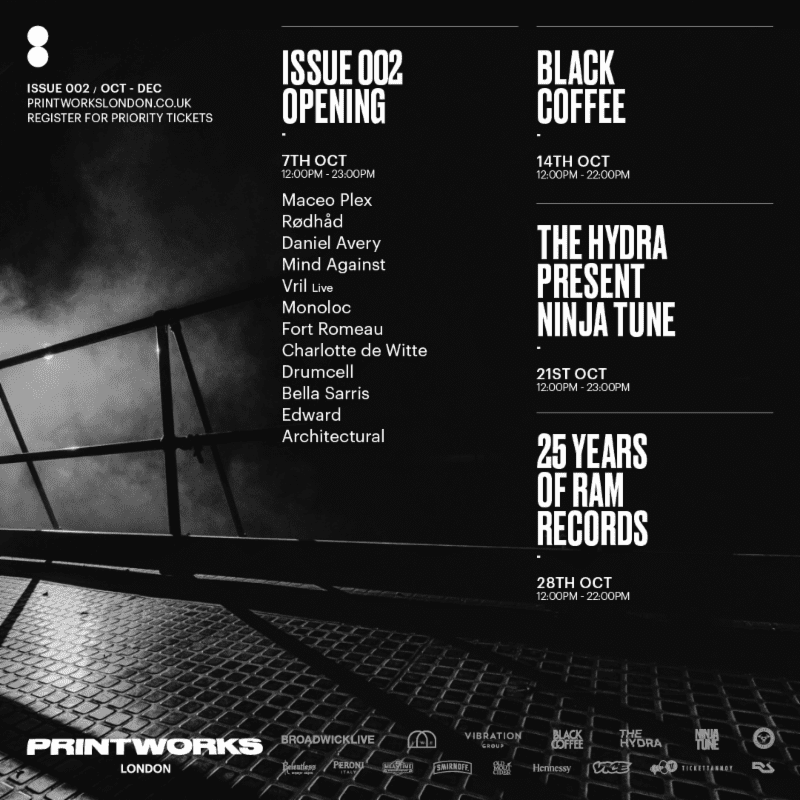 Having laid dormant since Easter weekend, Printworks have allowed the dust to settle on Issue 001. It's fair to say that Printworks went above and beyond our wildest expectation during its debut season of events. Week-to-week it just kept getting bigger. In a few short months Printworks went from being an ex-printing facility being used as an event space, to earning a reputation as a venue.

Although it remained closed for the summer months, Pritnworks are eager to keep that momentum going with another finely-tuned season of programming. Running from October to December in a genre-spanning 10-week run, Issue 002 will pick-up right where Issue 001 left off.

Printworks kick-off with full fanfare on Saturday 7th October. They've spared no expense on the line-up, and it plays to Printworks' strength as an industrial temple of techno. Ellum Audio boss Maceo Plex heads things up, and he's joined by an elite supporting cast. Berlin stronghold Dystopian's Rødhåd and Monolocare joined by London favourite Daniel Avery. In addition they're delighted to be welcoming Italian brothersMind Against back to Printworks. Rising Belgian star Charlotte de Witte is invited off the back of her sterling display at Junction 2 earlier this summer. Elsewhere Vril and Edward will be performing live shows. Expect plenty of dark, ominous tones with some mind-bending production & lighting.

Next-up Printworks are psyched to give South African export Black Coffee a 5-hour platform to showcase his deep sounds. After suffering paralysis down his left-side as a teenager, his story is one of perseverance and, ultimately, hope. He'll be curating the lineup with some special guests soon.
Printworks are thrilled to invite back long-term collaborators The Hydra for another date on 21st October. During Issue 001 the London-based promoters sparked the curiosity of a new legion of followers whilst never venturing far from their sound. Their impeccably crafted line-ups included Floating Points, Motor City Drum Ensemble, DJ Koze and Daphni amongst others.

On 28th October they celebrate 25 Years of infamous DNB label RAM records. Founded by the legendary Andy C and run alongside Red One, RAM's decorated alumni reads like a who's who of Drum & Bass: Chase & Status, SubFocus, Wilkinson, Bad Company, Delta Heavy, Frankee… we could go on. At the moment the line-up is a tightly guarded secret, but in true RAM fashion we're expecting nothing less than to be blow away.