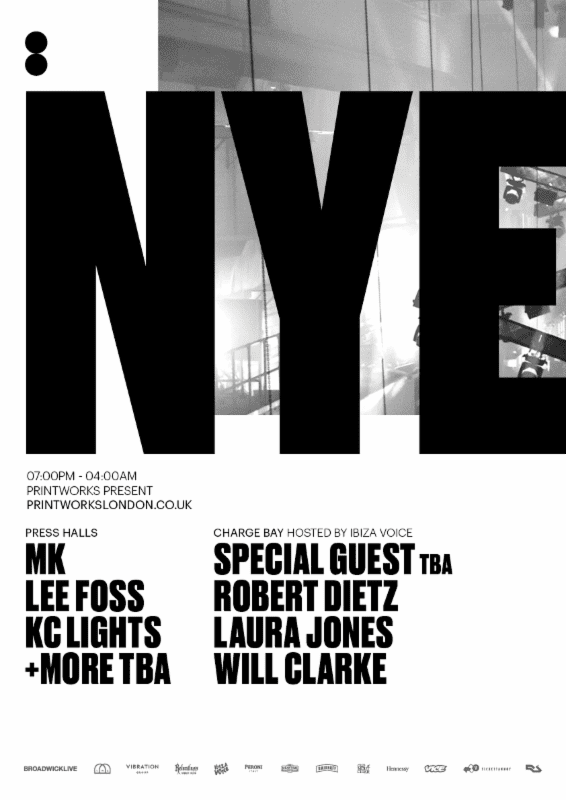 Printworks London announce their NYE and NYD shows, running through the night for the first time ever to welcome 2018 for their New Years bash.

MK is one of house music's most prolific producers and arguably the greatest remixer of all time. In a career spanning three decades, from Push The Feeling On to Piece Of Me, there's little he hasn't achieved. And on NYE he can cross playing Printworks from his list.

Marc is joined by frequent collaborator Lee Foss. As two-third of Pleasure State, they are no strangers to sharing a stage together. Foss is equally at home in an East London basement as he is at an LA pool party. So we're sure he can adapt to the cavernous Print Halls.

Someone who MK has been championing for a while, KC Lights is part of a new breed of producers hailing from north of the border. The young Glaswegian DJ/producer also counts Radio 1's Annie Mac & Danny Howard amongst his biggest supporters. With the world at his feet, it feels right to give KC his biggest stage to date.

With her trademark orange sunglasses and beaming smile, Laura Jones unique take on house and techno explores the idea of sensory expansion. It was a trip to Ibiza where she first discovered underground electronic music. Her love affair now brings her to Printworks.

Will Clarke is latest hatchling from Dirtybird's Bristol nest. If you don't know him yet, you soon will, he's the one with the well-groomed beard. Room 2's headline act is still yet to be announced.
Printworks NYE is their first night-time event, running from 10:00pm – 04:00am.

Fresh of the back of their Outer Edges album, Noisia might  be the hottest act in drum and bass. The Dutch trio will be heading-up the Print Halls. Joining the headliners is an ensemble of Bass Royalty!

Paul Woolford will be appearing under bass-ier, genre-spanning alias Special Request playing an exclusive back-to-back with non-other than DJ Zinc.

Dub Phizix & Strategy are a Mancunian DJ & MC partnership whose distinctive style has bagged them a FABRIClive mix and R1 Residency show.

Bladerunner, Serum & Voltage form the Kings of Rollers and promise more damage than any other bass act on the planet!

Heading-up the Charge Bay is a pioneer responsible for merging the worlds of dubstep and grime together: Caspa.

Complimenting him is another act who has successfully straddled both genres: Deep Medi Musik'sCommodo.

Elsewhere Old Skool legend Slipmatt locks horns with a man who knows no musical boundaries,Mumdance for a fantasy B2B face-off. They be playing strictly Hardcore.
And Nicky Blackmarket will be playing a special BM records set.

Madam X, Star One and The Blast DJs round things up in Room 2.

Full details and tickets are available at: http://printworkslondon.co.uk