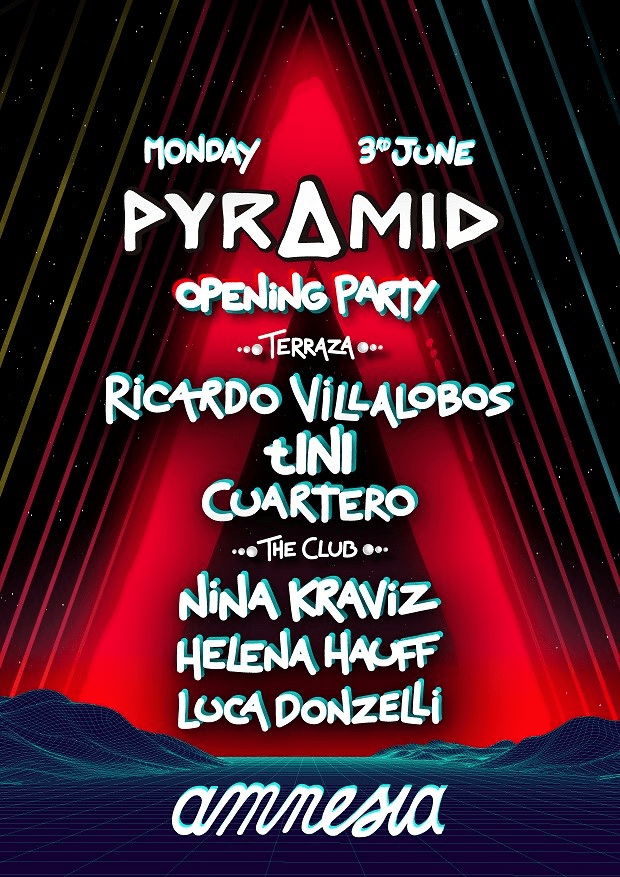 After a successful debut Ibiza season and 2 impressive UK shows (Studio 338 & Printworks in London), Pyramid is back for a 9 date second season at Ibiza’s legendary nightclub Amnesia (3rd June – 23rd September, every other Monday) and can now confirm its colossal opening party line up.

With the intent of providing an authentic Ibiza party, Amnesia have pulled out all the stops once again to deliver another season of unforgettable Pyramid events that have a big emphasis on production, performance and decoration, alongside unbeatable line ups.

Helping to kick the season off in style will be none other than the pioneering Chilean-born DJ/producer and Amnesia regular Ricardo Villaloboswho’ll be heading up the club’s world-renowned terrace area and performing alongside the revered German selector tINI and Spanish tech house talent Cuartero.

Elsewhere, the Russian sensation Nina Kraviz and Hamburg’s in demand spinner Helena Hauff will be taking over the club room for a memorable night, playing alongside Pyramid’s much-loved resident DJ Luca Donzelli.

In 2018, Pyramid became THE place to be on a Monday night in Ibiza leaving many revellers in awe of new event concept which saw some of the world’s finest DJs/acts deliver standout sets, such as; Ricardo Villalobos, Luciano, Maceo Plex, Nina Kraviz, Helena Hauff, Raresh, Ben Klock, Charlotte de Witte, Stephan Bodzin, KiNK, Cuartero, Guti, Eats Everything and Luigi Madonna aongst many others.

With many surprises planned for its return plus mind-blowing production unitising organic materials, state-of-art technology and lighting, 2019 is set to be another remarkable season.

The full season line up will soon be revealed, it’s going to be BIG – stay tuned!