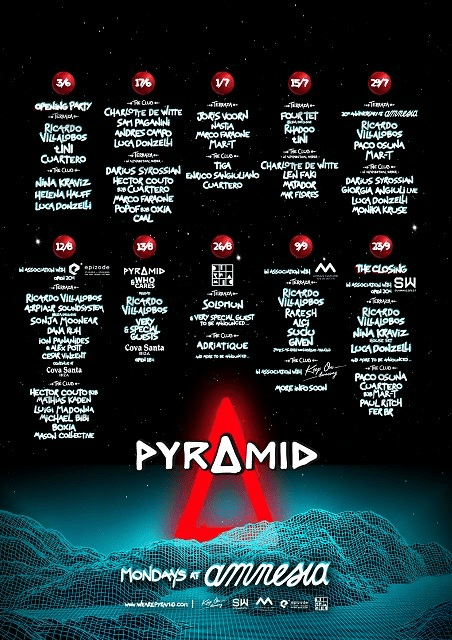 Following recent announcements regarding Pyramid being back for a 9 date second season at Ibiza’s legendary nightclub Amnesia (3rd June – 23rd September, every other Monday), the club are now proud to confirm its exciting full summer calendar.

With the intent of providing an authentic Ibiza party, Amnesia have pulled out all the stops once again to deliver another season of unforgettable Pyramid events that have a big emphasis on production, performance and decoration, alongside mesmerising line ups.

The season kicks off in style on 3rd June with Pyramid’s colossal opening party, seeing the esteemed Amnesia regular Ricardo Villalobos joined by tINI and Cuartero on the Terrace, whilst in the Club Room Hamburg’s in demand spinner Helena Hauff and Pyramid’s much-loved resident DJ Luca Donzelli will be joined by Russian sensation Nina Kraviz, who’s also scheduled to deliver a rare house set on the Terrace at the season’s closing party.

Furthermore, a stellar live performance will be provided by Italy’s Giorgia Angiulli on 29th July and an array of exclusive B2B sessions will be served up by the likes of Hector Couto X Cuartero and Popof X Oxia on 17th June, Hector Couto X Mathias Kaden on 12th August and Cuartero X Mar-T on 23rd September.

But that’s not all, as Amnesia will also see its famous event spaces hosted in association with prominent international festival/event brands such as EPIZODE (12th August, Terrace), MDRNITY (9th September, Terrace), Keep on Dancing (9th September, Club Room) and Sunwaves (Closing Party), PLUS Germany’s renowned Diynamic imprint are back – after the success of last season’s debut showcase – to host another unmissable party on 26th August featuring label boss Solomun headlining the Terrace and Adriatiquein the Club Room with more acts still to be announced.

Pyramid is once again set for another outstanding season and invites you to dance, feel and live a party that has been so truly missed on the island for many years.

Terrace:
In association with EPIZODE – 12hr party, open from 6pm

Club Room:
In association with Keep On Dancing
Line up TBA