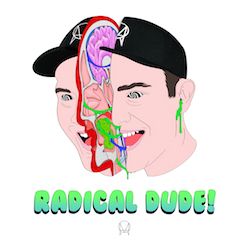 LA bass music mainstay Getter has announced his sophomore OWSLA EP, Radical Dude!, out this Friday, March 11th. He became an early favourite in the underground bass scene and pays homage to those roots on 'Rip N Dip' and 'In The Cuts' while expanding his sound on high octane club songs 'Back' and '666!' from OWSLA’s acclaimed Worldwide Broadcast LP, brighter indie track 'Forget It' with vocalist Tree, and melodic banger 'Blood' featuring singer/songwriter Georgia Ku.

Getter’s constant experimentation with sound design and his tendency to challenge himself marks him as one of OWSLA’s key artists to watch for 2016 and beyond.