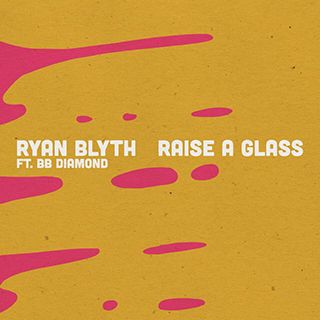 Ryan Blyth delivers what is set to be one of the stand-out tracks of the year, the uplifting ‘Raise A Glass’, released on Columbia Records on 4 May.

‘Raise A Glass’ is a brilliantly catchy anthem of empowerment, featuring BB Diamond’s sultry and powerful vocal as she celebrates shutting down a player instead of putting up with his games.

‘Raise A Glass’ features samba percussion and Latino piano alongside an infectious hook that samples the legendary house track ‘Disco’s Revenge’ by Gusto (itself a sample of Harvey Mason’s classic ‘Groovin’ You’) to ensure that ‘Raise A Glass’ will pack dance-floors right across the UK to Ibiza!

Ryan Blyth became one of the first signings to Danny Howard’s Nothing Else Matters label with ‘Trust Me’ in 2016. This was followed by two releases on Toolroom Records via their Love & Other label – ‘Who’ and ‘Once Twice’.

A huge fan of 90s classic house, Ryan Blyth partnered with the Armand Van Helden and Bob Sinclair vocalist Duane Harden for ‘Back To You’ which Don Diablo signed to his Hexagon label. Ryan Blyth’s next release, 'Show Me', became a regular on BBC Radio 1 Dance Anthems and has been streamed over 15 million times on Spotify.

In 2017, Ryan Blyth releases ‘Special’ ft. Luther Soul on Spinnin’ Records and ‘You & Me’ on New State Music with UK Grime artist Scrufizzer and leading vocalist Rae Hall. ‘You Can’t Hide’ on Sleazy Tech went to No.1 on Traxsource and No.2 on Beatport’s Top 100 House in March 2018.

BB Diamond is a leading London-based vocalist who has worked with such acclaimed artists as Jess Glynne, Katy B, Clean Bandit, Shift K3Y, Original Sin, EDX, Draper, and Freejack, as well as releasing her own material.