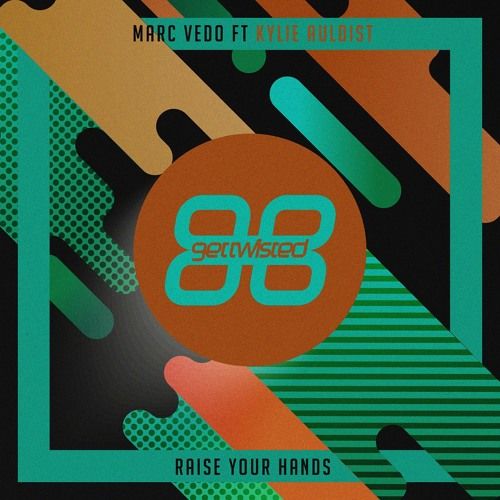 Having impressed so much on the huge ‘Ride of Your Life’ in early 2017, Marc Vedo and Kylie Auldist look set for another big hit with ‘Raise Your Hands’, that perfectly showcases Marc Vedo’s classic house sound alongside Kylie Auldist’s powerful vocal.

As Marc Vedo says about ‘Raise Your Hands’: “It’s an absolute pleasure to be working once again with Kylie on this great track.  Her soulful voice really compliments the drums and the energy of the music. Working in collaboration with a great label like Get Twisted, we feel this could do really well.  Excited to see where this one goes!”

Marc Vedo set-up his own Koolwaters brand aged just 18, creating one of the most legendary parties in the country and establishing Marc as a force in the industry. Today, Koolwaters has become one of the leading agencies in the world and a highly credible house music label nurturing new talent.

Marc Vedo has enjoyed a stellar couple of years. In 2016, he was one of the Top 100 bestselling house artists in the world on Traxsource, with support from Mark Knight, Pete Tong, Roger Sanchez, Sasha, Joseph Capriati, Steve Lawler, and Joris Voorn amongst others.

In 2016, Marc Vedo held a weekly summer residency at the iconic Bora Bora in Ibiza and celebrated a No.26 Beatport Top 100 single, several Top 5 tracks on Traxsource and his first No.1 in the UK Upfront Club Charts. His single ‘I Wanna Know’ with Mila Falls was one of the biggest house records to date for him, gaining huge radio support from such names as Blonde, Gorgon City, Danny Howard, MistaJam, and B. Traits.

In early 2017, Marc Vedo first collaborated with the No.1 selling Australian vocalist Kylie Auldist on the huge ‘Ride of Your Life’. Kylie Auldist previously collaborated with KUNGS on the single ‘This Girl’ to produce one of the biggest selling house singles of 2016, which went No.1 in eight countries and Top 40 in fifty-four countries worldwide.