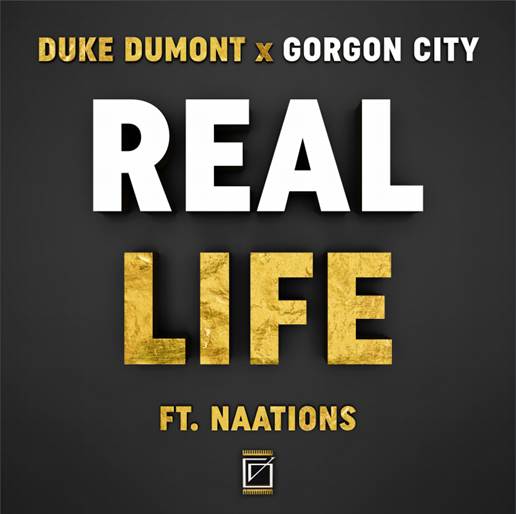 The most powerful names in modern-day dance music, Duke Dumont and Gorgon City have joined forces for ‘Real Life’ featuring NAATIONS. Inspired by the beautiful Balearic setting of Ibiza, the track is set to be a summer anthem on the white isle and beyond!

The prolific duo Gorgon City have sold in excess of 2 million combined singles and albums worldwide. They have completed multiple sold-out UK & USA live tours and have taken their KINGDOM DJ events across the globe. Preparing for a busy summer, Gorgon City will be heading back to Amnesia, Ibiza for their headline residency and playing live shows at SW4 Festival, Boardmasters and V Festival where they’ll be headlining the dance stage.

Duke Dumont has released a hat-trick of massive UK hits – two UK #1’s with the Grammy-nominated ‘Need U (100%)’ featuring A*M*E and ‘I Got U’ feat Jax Jones, followed in quick succession by #2record ‘Won’t Go Back’. Amassing 1 billion combined streams across his release history to date, Duke Dumont has played one of the most pivotal roles in making UK Deep House the global juggernaut that it is today. Most recently, the UK titan has produced and co-written the huge new single from Katy Perry(featuring Nicki Minaj) – “Swish, Swish”. Now residing in Los Angeles, his strong work ethic echoes throughout his extensive touring schedule. Throughout the rest of 2017, Duke will see out an American and Australian tour, as well as several Ibiza dates in between including his residency at Together, Amnesia.

Together the deep housetitans have sold 4.5 million singles and will be performing at Amnesia, Ibiza in August.

Their latest project ‘Real Life’ is the perfect example of their ability to produce incredible hits ready for dance floors around the world. A soulful piano melody underpins a hefty low end and jacking rhythm, whilst NAATION’s soaring vocals are lusciously layered over the top. Showcasing emerging talent,NAATION’s addition brings a pop element to the crossover single.

With astounding global recognition and two of the biggest UK’s dance music exports, the project is bound for a successful trajectory.