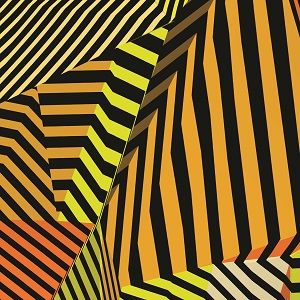 Taken from his forthcoming second album, ‘African Fabrics’, the track exemplifies Haaksman’s unique attitude to music and production, and his dedication to the international development of sound. In his first album, deeply rooted in the self-coined aesthetic of Baile Funk, Haaksman utilised Brazilian sound as a foothold for the globalisation of music, and with ‘African Fabrics’ he continues the trend within an African sonic framework. In keeping with his theme, the single is accompanied by original artwork from 2009 Venice Biennale Golden Lion winner Tobias Rehberger, one of twelve individual African inspired patterns created for each track of the forthcoming album.

The single, which perfectly combines the best of classic minimalism with the bass love of today, draws on the colonial history of Germany, illustrating the combination of German and African culture through colonisation by melding the soft kalimba with modern electronics. Opening with tinkling chimes reminiscent of the stark kalimba compositions of Steve Reich, Haaksman makes his own unmistakable mark with a heavy sub bass and two-step influenced rhythm to produce a track that equally calls to mind the sounds of Bonobo. The accompanying visuals further demonstrate the track’s political awareness by addressing the demand for street-name changes in ‘Afrikanisches Viertel’ – the colonial quarter of Berlin – and features two pole-dancers transforming signs bearing the names of questionable colonial figures with their moves.

In 2004, with the release of his ‘Rio Baile Funk Favela Booty Beats’ compilation, Haaksman introduced the distinctive sound of Rio’s favelas to the world, before giving it a platform and his very own Berlin treatment with the launch of Man Recordings, now considered to be one of the leading tropical bass labels in the world; with releases from the likes of Diplo, Schlachtofbronx, Crookers and Bert On Beats.

The accomplished producer has also worked on official remixes for such acts as Waldemar Bastos, Gotan Project and Ray Baretto, and has DJ’d relentlessly across the board; from internationally renowned festivals to Hollywood parties.

With early DJ support from the likes of Seiji, Sinden, Toy Selectah, Roundtable Knights and Flexican, and accompanied by remixes from the inventor of ‘Bacardi House’, DJ Spoko, alongside Lisbon’s Kuduro whizkid Dotorado, ‘Rename The Streets’ marks the return of an artist beyond limits.