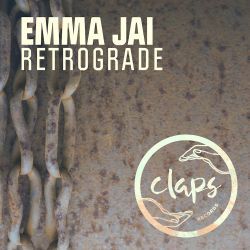 Tuscany's fledgling label Claps Records continue to rapidly gather momentum as they welcome one of the rising stars of the female DJ world to the camp, Emma Jai.'Retroagrade' is a smouldering slab of deep, underground House pinned together with a cool old school flavoured synth hook, jackin' beats and teased with smokey vocal samples. Also on the package Claps label mate, Giacomo Donati (2 Sides Of Soul), brings forth his powerful deep and techy tones, cooking up a monster bass driven groove that's armed with dynamic breakdowns, creating perfect tension for the dance floor to erupt!

Dublin's Emma Jai is fast becoming known as one of Europe’s rising female DJ`s.  With her first solo release 'Underelectrick' signed to Pacha Recordings, which featured on Pacha Underground Compilation, along with her collaboration with Pippi Ciez 'Angels Whispers' signed to Bloxbox Records, this girl is making waves on the scene.  After holding residencies for many Dublin clubs and radio stations,  Emma decided to push her music career further and moved to Ibiza In 2013 to focus on music production. She has since been signed to one of Berlin's biggest labels Hontas Records for her re-work of Corey Biggs (Bring Em’ Water) and also has a release due this year on DC-10 Records. Djing in Ibiza, Emma runs her own club nights 'Undersound' and has held down a residency at super Club Eden, alongside guest spots at Sankeys, Zoo Project, Ibiza Rocks, Santos, among others. She has also played alongside acts such as Drum Code’s Alan Fitzpatrick, Doorly, Jason Bye and Carl Cox on various boat parties. Keep an eye out for Emma Jai, she is definitely one to watch out for in the future!

'Retrograde' will be released on May 6th 2016 on Claps Records.