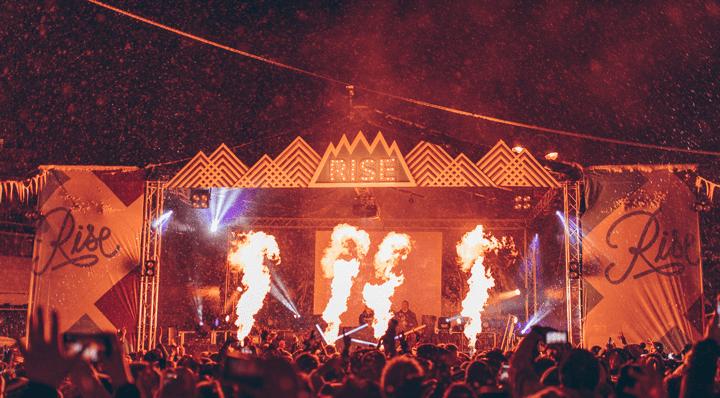 There is no better way to kick off the festive season than with a high octane, action packed week in a world class ski resort with a next level soundtrack and that is just what globally acclaimed Rise Winter Festival will be offering once again from 14th – 21st December in the stunning French resort of Les Deux Alpes. Bigger and better than ever, with new additions, new venues and new activities, this pre-Christmas winter wonderland and unique musical holiday experience has now revealed that the first wave of names for the 2019 edition include superstars such as Chase & Status, Solardo, Michael Bibi, Horse Meat Disco, The Craig Charles Funk & Soul club, an orchestral rendition of Destiny’s Child & Christmas Hits, Bongo’s Bingo and much more, all with tickets starting at just £199.

UK duo Chase & Status are unquestionably drum & bass icons. They have defined the genre over the last decade with key residences at super clubs such as Amnesia in Ibiza as well as spellbinding DJ sets all over the world. Their latest album Return II Jungle sees them go back to their roots and has shot their profile into the stratosphere. Their set in the snow is shaping up be a very special moment.

Next up, Solardo are the duo from Manchester who have gone on to light up the world with their infectious take on tech house. They have their own party at Hiï Ibiza and a label, Sola, that provides plenty of gold for DJs and dancers and made plenty of new stars of those who have released on it. Then comes another cult figure in Michael Bibi, who founded and is resident at Solid Grooves, one of the coolest and edgiest house parties with events in both London and Ibiza.

Horse Meat Disco bring the most colourful soundtrack with a deep knowledge of all forms of house and disco that takes them around the world as well as to their own events at places such as Glastonbury. Add in the The Craig Charles Funk & Soul Club which brings the best funk and soul scene sounds from the last three decades, a unique orchestral rendition of Destiny’s Child & Christmas Hits that will rework classic tracks with real musical grandeur plus Bongo’s Bingo, which includes several rounds of bingo interspersed with rave intervals, dance-offs and catwalks down tables and you have the makings of another unforgettable event.

Alongside an insane lineup, this year offers an endless list of unique and extraordinary experiences that make Rise the ultimate Party on Top of the World. You can look forward to gondola raves, a festive fancy dress ski parade, outrageous Alpine bingo, Team GB athletes presenting the Rise Snow Games, glacier yoga, healthy high breathe workshops, husky sleigh rides and arctic ice discos all soaked in that Christmas spirit high. This plays out in an impossibly perfect, snow-covered resort which oozes atmosphere, great vibes and wild times in a Christmas winter wonderland. This fantastically festive and complete alpine adventure has established itself as an immersive event like no other. With next level attention to detail when it comes to production, incredible lineups and a truly inclusive feel, this winter festival needs to be on everyone’s calendar.

Rise 2018 welcomed over 3000 people from around the world to a week of high energy music, phenomenal fun and simply crazy après ski partying culminating in a once in a lifetime trip. Highlights such as David Rodigan hosting the Christmas stage, blew the crowd away with his raw bass riddims and a first ever sunrise hike with awe-inspiring views also proved a firm favourite. As did the record abundant snowfall; allowing the adventure seekers among them to flex in the fresh pow, sunshine filled days and perfect soundtracks.

The beautiful Les Deux Alpes setting is the popular choice with those in the know and for good reason; it’s a bucket-list alpine destination that has been voted third best in Europe by The Telegraph. Each year, the Rise team transforms it with their own unique production and creates an electrifying Party on Top of the World. The 222 km of perfectly maintained pistes are served by an impressive 47 lifts so you can shred the mountain all week without getting bored; whilst taking in the picturesque views and checking out the largest snow covered glacier in Europe, which stands at over 3500m. As well as lift-accessed world class off-piste skiing, the resort is famous for its refined eateries ranging from Michelin starred French restaurants to an eclectic mix of informal world cuisines that will allow you to live like a VIP in this winter wonderland, whatever your budget.

Christmassy fun and mind-blowing tunes from a melange of bass, house, techno, hip hop, disco and live bands plays out in mountain summits under the stars, banging arenas, cosy hideaways and open-air alpine stages. For it’s 6th edition, the High Altitude Stage, Alpine Main Stage and Rise Arena will be welcoming the most monumental line up in Rise Festival history. As well as the key focus on music, snow and adventure, expect exciting new additions such as; the Piste Pretty Yurt, a place where you’ll be transformed from snow chic to arena glam, pop up ice bars making cheeky appearances around the mountain, impromptu raves in high altitude places hosted by Soundboks with special guests inviting you to the secret knees ups and James Bond-esque starlit snowmobile rides.

In 2019, the World of Rise will encompass a number of specially handpicked venue partners, bars, restaurants and other local attractions that together make up the festival village and includes the Rise Gin Bar, the Craft Beer Pub, the Guilty Pleasures Den and notorious S.M.I.T.H.Y.S with its throwback jams and old school sounds. New for this year will also be Barrels & Boards: The Wine & Cheese Experience and Bubbles Breakfast Club – a bottomless bubbles brunch for anyone and everyone, both expected to be on everyone’s agenda.

Whether you’re a seasoned pro on the slopes or think that après is more your scene and you’re just starting out on the snow, Rise Winter Festival makes sure it caters for everyone’s needs and can soothe your soul after a hard day on the hills or will test your stamina if you’re heading straight out to party. Unrivalled night time festival shenanigans meets snow and adventure in breath-taking surroundings. It’s a sure-fire epic week in a guaranteed snowy utopia – the premier season opener and a perfect Christmas love-in.

Festival tickets including six day lift pass start at £239 and are available at;www.risefestival.co.uk