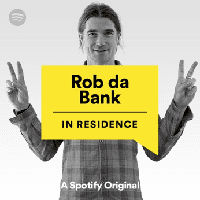 Rob da Bank said “As ever at the start of a year there are so many incredible new artists and producers churning out fresh, revolutionary new styles and 2016 is no different. Its always good to be broadcasting those to as many people as possible and I’m really chuffed to be on Spotify with that simple aim…  to share a couple of hours of brand new music from across the globe”

Appearing on the first of each calendar month, da Bank’s new series launches with a Tips of 2016 special featuring new music from the likes of Vince Staples, Beirut, Plastikman, Beach House and Benjamin Damage. The residency will continue throughout the year showcasing an eclectic mix of worldwide chill, grime, hip-hop, techno and house, all looking ahead to the very best new music.