Robbie Williams will play at UNTOLD 2019, at its 5 year anniversary 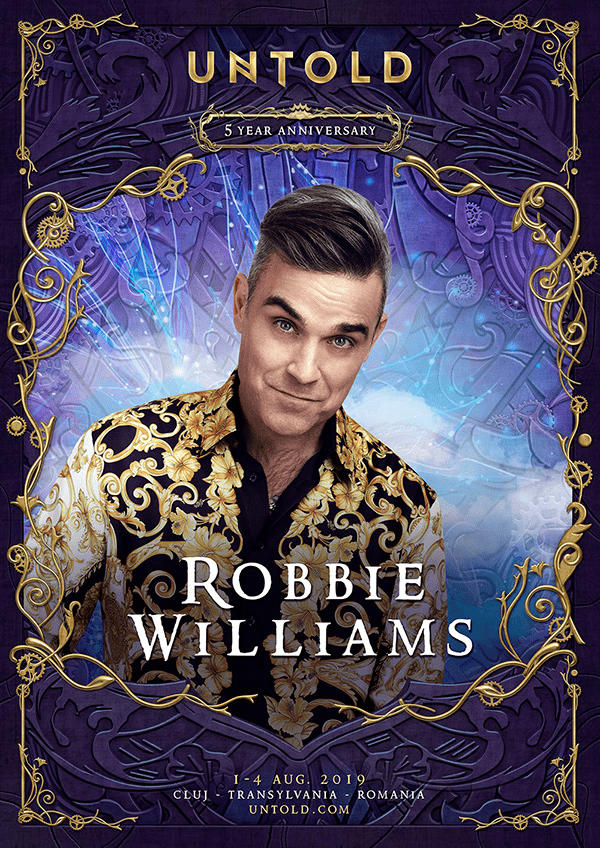 Robbie Williams will play at UNTOLD 2019, at its 5 year anniversary

It is with enormous pride and joy that we can present Robbie Williams as the headliner at UNTOLD 2019. The British entertainer will only play a handful of concerts in 2019 – and his concert at UNTOLD, in the heart of Transylvania, will be his only one inRomania this year. This is a magical present offered by organizers to all UNTOLD and Robbie Williams fans in Europe and it will be the show of the year in Romania.

Since bursting on to the stage as the youngest member of Take That in 1990 to going solo in 1995, Robbie Williams has been at the top of his game for nearly 30 years. As a solo artist, he has sold over 77 million albums worldwide; has six of the top 100 best-selling albums in British history; and has had 14 Number 1 singles. He is also one of the most in-demand live performers in music, and continues to play stadiums around the world, and has won a record 18 BRIT Awards – more than any other artist in music history.

Among the many Robbie Williams hits are “Feel”, “Angels”, “Rock DJ”, “Let Me Entertain You”, “Freedom”, “Millennium”, “She´s The One”, “Old Before I Die”, “Kids”, “Eternity”, ” Something Stupid ”, “Radio”, “Bodies” and “Candy”. With Robbie Williams headlining the UNTOLD festival 2019, we can all look forward to the ultimate party.

Robbie Williams will play on the UNTOLD Mainstage, on Sunday, August 4.