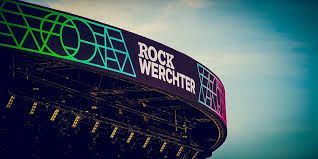 Known for their stunning debut album ‘Funeral’, Canada’s finest art-rock troupe Arcade Fire will be returning to Rock Werchter after a seven year absence in to perform all-encompassing hits from their critically acclaimed career. Joining Arcade Fire are Nashville’s favourite sons, Kings of Leon, as they promise to bring their sweeping southern anthems to Werchter’s Festivalpark.

No strangers to Belgium’s hallowed festival ground, alt-rock giants Radiohead are one of the most revered live bands of all time. In their vast 32 years, the band lead by Thom Yorke have written the most influential albums of this century, and their return to Rock Werchter promises to be another landmark moment in their acclaimed career.

Bringing the mosh to Rock Werchter are two of the most intriguing bands to emerge from the metal scene. Nu-metal pioneers Linkin Park, known for their hard-hitting rap-metal debut ‘Hybrid Theory’ and their monumental Jay-Z mashup EP ‘Collision Course’, and the ever-intriguing System of a Down are poised for septic singalongs such as ‘Toxicity’ and ‘Chop Suey!’

Known for their highly anticipated catalogue of singalong anthems such as “Everlong”, “Monkey Wrench”, “My Hero” and “All My Life”, the multi-award winning Foo Fighters are set to unleash their iconic brand of american stadium rock on Rock Werchter.

Mastering the art of European festivals, Rock Werchter recently won Best Major Festival at the European Festival Awards with last years blistering display. With close to 150,000 unique visitors descending on the Festivalpark each year, Rock Werchter Festival 2017 is set to be the most highly-anticipated party of the summer, promising an unforgettable weekend celebrating the best in arts, music and culture, bringing an exciting new chapter to the Werchter fields.

Full Combi tickets across the weekend start from £204, with limited day tickets for the Thursday, Friday and Sunday still available. Head to http://www.rockwerchter.be/en/ for more information.