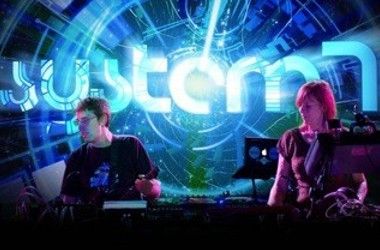 Phoenix Rising unites UK electronic music pioneers, System 7 and Japanese band, Rovo, in a new musical project, which they launch with their ‘bird of fire’ double-header ‘Hinotori EP’ in June ahead of System 7’s headline dates at Glastonbury’s Glade Stage.

The energetic ‘Hinotori’ EP features 3 different tracks, including Remixes from System 7 and Evan Marc alongside two tracks by Rovo, and kicks off with the ‘Hinotori’ single. Meshing psychedelic and percussive freestyle beats,  it drives the dancefloor with its jupiter jazz-style ambient guitar and keyboards.

System 7’s 2013 Remix untaps a more minimal thread, building up through beats and keys with the percussive drums fuelling a twisted, tech groove.

System 7’s Phoenix Rising Version of Rovo’s ‘Eclipse’ bleeps into orbit with its subtle techno tones laying the foundations for a deeply warm journey into the groove, interwoven with psychedelic shading and funky keys.

Closing this 5 track EP is the 9 minute Evan Marc Remix of ‘Hinotori’, lacing shimmering beats under a building ambi-tech groove that breaks down into slabs of acidic funk before working back up to its unstoppable rhythmatic soundscape.

Rovo and System 7’s Phoenix Rising live show combines System 7’s electronica synthesised with Rovo’s sound, using techno beats as the rhythmic basic and live drums, seamlessly morphing from one to the other. With a full Phoenix Rising studio album set for UK release on September 23rd 2013, featuring original collaborations from System 7 and Rovo, it also includes a new arrangement of ‘Meeting of the Spirits’ by the Mahavishnu Orchestra –  a perfect showcase for the album’s astonishing blend of guitar and electric violin.  Phoenix Rising  kick off their tour of Japan and Taiwan in November, and announce 2 UK dates in March 2014.

System 7 are Steve Hillage and Miquette Giraudy, whose ‘Passion EP’ of last year and 2011’s techno-fuelled album ‘UP’ (on which they collaborated with A Guy Called Gerald on some of the tracks) sees the duo continue to reinvent post electronic music as well as retaining a busy diary of Live & DJ dates across the global EDM and festival scene.

Unquestionably hungry still, the duo are working on new Mirror System and System 7 albums (to appear in 2014), having been recording in the exotic touring locations of Hong Kong, Bali and Mexico. System 7 present a unique combination of tech-house beats and live musicianship, and have had a strong influence on the development of psychedelic ambient and electronica.