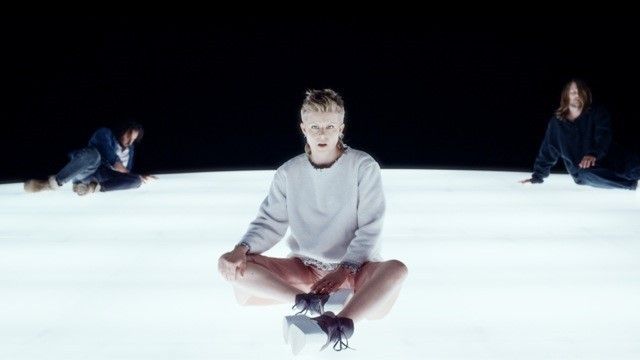 Röyksopp and Robyn premiere the ‘Monument’ video via Vice + Intel’s The Creators Project. ‘Monument’ is taken from the critically-acclaimed ‘Do It Again’ mini-album out now on Dog Triumph via Wall of Sound and Cooking Vinyl. ‘Monument’ remixes from Kindness and Mark E will be available from 18th August.

Röyksopp & Robyn’s ‘Do It Again’ has become this Summer’s most talked about record and live show, garnering worldwide critical praise, a sold-out tour and chart success.

As Röyksopp & Robyn come to the end of their DIA tour they bid farewell with the release of their final video – for the epic 10-minute long track ‘Monument’, the inspiring mini-album opener.

Director Max Vitali created a weightless and timeless space by shooting on a wire-based camera, drawing the viewer in on a journey of self discovery, a central theme throughout the song. The video was produced by VICE + Intel’s The Creators Project.

“The video is about exploring the space around you and in you and finding your own space within it all. Half real, half fantasy. The way I see film is as a hybrid of technology and emotions, and hopefully there’s an artistic vision there as well. In a way that is what Röyksopp & Robyn also do, they merge something real with something computer-generated to create bigger landscapes than possible without the help of technology.” (Max Vitali)

“The video for ‘Monument’ is a kind of inner journey which I think is also what the music is about. Like space in time and physicality and your own experience of your body.” (Robyn)

“There is light and darkness colliding and it’s all being served on a lit-up platter to encapsulate this ceremony we are partaking in. It has been influenced by the iconic imagery in 70’s sci-fi comics that we grew up with.” (Svein Berge)

Röyksopp and Robyn’s ‘Do It Again’ mini-album hit #1 on the iTunes Electronic chart in over 10 countries including the UK, US, Germany, Sweden, Holland, Canada and Japan and entered the Top 10 on the iTunes Album chart in over 10 countries including the US, Australia and France with a #1 chart position in Sweden. ‘Do It Again’ entered the Official UK Album Chart mid-week at #8. The ‘Do It Again’ mini-album serves as an introduction to the new Röyksopp album. Details to be announced.