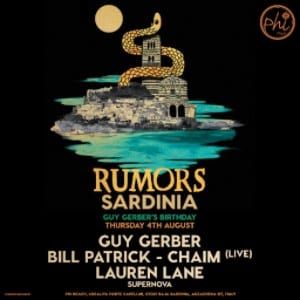 Guy Gerber is bringing his acclaimed RUMORS event series to the idyllic setting of the Phi Beach club on the shores of Sardinia for his birthday on Thursday, 4th August.

The RUMORS events began life as a beach party in Ibiza, and have now gone worldwide with events at Art Basel Miami, BPM Mexico, the huge Great Suffolk Street Warehouse in London and most recently at Chinatown in LA, proving that RUMORS really do spread. The 2016 season in Ibiza takes place in the magical setting of Destino, and has become the Sunday destination for discerning partygoers on the island. Meanwhile, the Sardinia party is the latest of one-off RUMORS beach parties in exotic locations around the world; the latest, in Mykonos, was a resounding success.

As it’s his birthday, Guy has enlisted the help of close friends and RUMORS associates to help bring the best party to the island.

Hailing from NYC and based in Berlin, Bill Patrick is a regular of the RUMORS parties worldwide, but started his career as a DJ in the legendary clubs of his hometown such as The Limelight, Vinyl and Arc. Whilst he’s not a producer, he’s acquired something of an in-the-know following for his skill and experience on the decks, and consistently gets booked for the likes of fabric London, Verboten New York, and Panorama Bar in Berlin.

He’ll be joined by fellow US artist Lauren Lane. An exciting upcoming artist, her career has taken off recently with productions on Eats Everything’s Edible Records and Nic Fanciulli’s Saved. Having cut her teeth as a DJ in the NYC club circuit, she now regularly gets booked for big gigs across Europe and has become a favourite of RUMORS.

Chaim will be rounding off the lineup with a special live performance. The talented Israeli artist’s productions have featured several times on Guy’s RUMORS label, whilst his hypnotic sets have made him a regular guest of the event series.

Rounding off the night will also be trusty RUMORS residents Jenia Tarsol and Sean Doran.

For a taste of what Guy himself has to offer at the night, make sure to check out a live recording of his set at RUMORS Ibiza on the 26th June on Soundcloud.

Production and atmosphere is key to the RUMORS parties, and Phi Beach is one of Sardinia’s premiere spots to watch a beautiful sunset whilst appreciating good music. Perched atop a rocky coastline and overlooked by an old fort, it makes the perfect venue for Guy and his guest’s enigmatic house and techno.

The Sardinia edition comes just ahead of a landmark RUMORS label showcase in Room 1 of London’s notorious fabric on August 20th, whilst the Ibiza parties are running until Sunday 16th October.