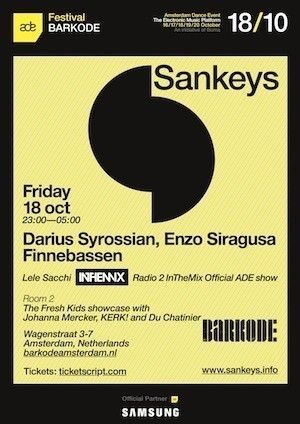 Sankeys have announced the final addition for the Amsterdam Dance Event will be none other than deep-house maestro Finnebassen. Currently enjoying his most impressive year to date Finnebassen is known for his dirty melancholic house. Remixes for the likes of Prince and Parachute Youth signal his musical prowess, whilst releases for Noir, OFF, Sleazy Deep, Nurvous and his forthcoming track on the latest chapter of JEUDI’s ‘Friends Series’ all provide evidence of his influence on the underground. In addition to Darius Syrossian and Enzo Siragusa, the booking of Finnebassen for the event at the centrally located Barkode on Friday 18th October signals a continuation by Sankeys in providing a platform for the next generation of house music stars to shine.

Sankeys is a globally recognized clubbing experience, having successfully been a permanent fixture in Manchester’s night-life for two decades.  Now in its third year in Ibiza, Sankeys has become the destination venue on the Island for those people who prefer to experience the most forward thinking music the White isle has to offer. The event at ADE signals owner David Vincent’s determination to bring that special Sankeys experience to new crowds, and will act as a segue to the much mooted Sankeys venue in New York and other Sankeys branded nights in clubbing capitals across the globe.

“I’m really pleased to announce our first event at ADE. For those few days Amsterdam really becomes the centre of the Universe for the electronic music community, so we are excited to bring the future sounds of Sankeys to the city for one very special night”. – David Vincent

Helping Finnebassen to spread the Sankeys mantra in Amsterdam are two of the finest Sankeys Ibiza residents in Darius Syrossian and Enzo Siragusa. Both are making their assault on the DJ elite with their respective styles. Darius, who was also a resident at Sankeys Manchester for an extended period before its close, has enjoyed a fine 18 months with his unadulterated no-nonsense ‘true house’ style making waves on the underground.
Conversely Enzo has played a big part in the London clubbing scene with both his Fuse events fast becoming the capital’s favourite Sunday party and his Fuse London record label, with it’s specific underground ‘Fusic’ style, becoming the musical microphone for a fast growing empire.
He recently joined the likes of Loco Dice, tINI and Guti on the Artist Alife booking agency. As such his synergy with this camp has only increased with Enzo playing at Used + Abused and tINI & The Gang at various dates throughout the summer. Of course Fuse also has their hugely successful weekly Wednesday night residency at Sankeys Ibiza in addition to broadening their horizons further afield in Europe.