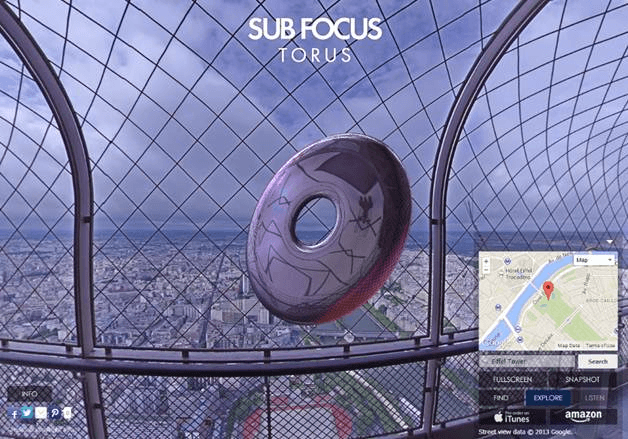 Today sees the launch of the Sub Focus ‘Torus’ 3D album sampler, the first ever in 3D and a first for Google Maps, at

Over the next seven days a total of thirteen Torus discs will be revealed in different locations across the globe, each accompanied by an audio preview from the forthcoming album, ‘Torus’. Sub Focus’ highly anticipated second album ‘Torus’ is released on 30th September and is available to preorder now at AMAZON, ITUNES and UNIVERSAL. Following the album release, Sub Focus hits the road for a UK Album tour, kicking off in Bristol on the 16th October. Tickets can be bought  HERE.

Users land on the FIND page and are urged to follow the hints in the ‘CLUES’ section to find the location of each disc and preview of a track. The clues will also be revealed on the Sub Focus social networks.

Once a Torus is found, users can zoom in and out and navigate around the Torus, all using the Google Maps functionality whilst the track is playing.

As well as the FIND mode of the sampler, the site also features EXPLORE and LISTEN .

EXPLORE allows fans to take the Torus to any location on Google Maps and screenshot their own custom album cover. Check it out at the top of the Eiffel Tower!

After all of the  previews have been revealed, on September 19th the LISTEN mode will become available where fans will see the Torus album cover in exclusive 3D form and can listen to the album previews in full.