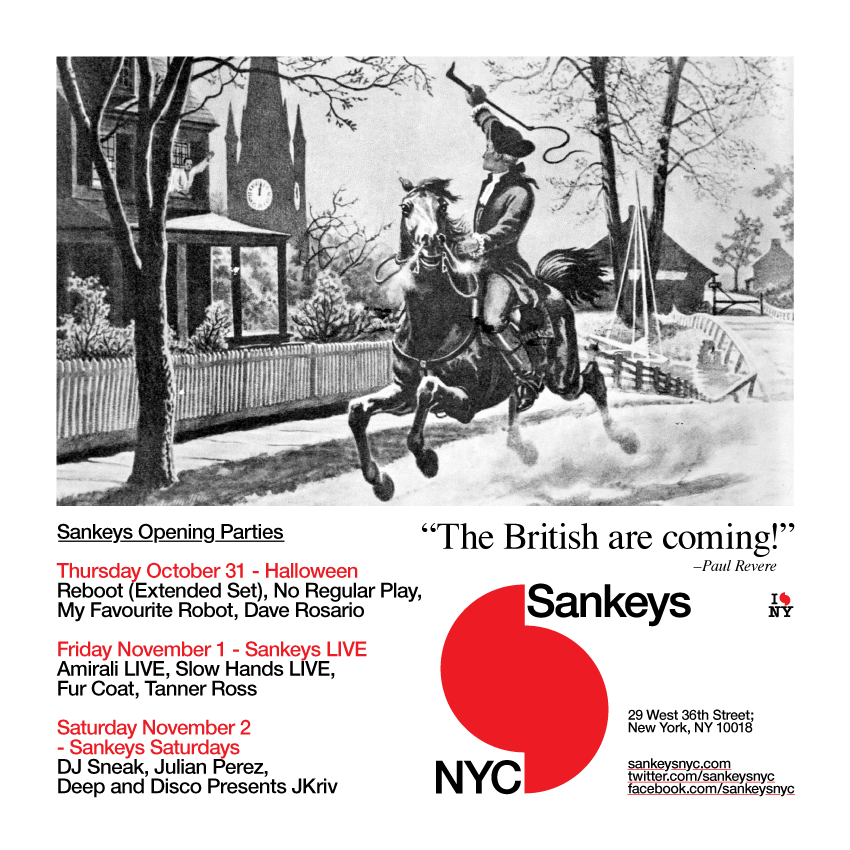 As Sankeys Ibiza’s third season draws to a spectacular close, attention is now turning to New York as the club’s long-awaited opening is realised with the theme “The British are Coming”.

Sankeys – the legendary UK clubbing institute, and the now permanent Ibiza fixture that regularly showcases the worlds biggest DJ’s alongside new and home-grown talent is set to become newest slice of the big apple’s club land.

Sankeys NYC will thrive on the Impulsive richness of the clubs attitude, that combined with authentic and palpable underground house music has driven this little soap story impressively further than its North Manchester roots. As anyone that has visited Sankeys in Manchester or Ibiza will know, New York’s club scene has been at the forefront of the global inspiration that created the world’s number one club, and captured the essence of legendary old school basement nightclubs like the Paradise Garage, Sound Factory and Vinyl from the “city that never sleeps”.

New York will be a showcase for up and coming and breakthrough artists, many of whom have led a charge of fresh irrepressible musical energy during this years Ibizan season as well as featuring leading names from around the world. Establishing a family of collaborators, label showcases, underground promoters and DJ collectives has created a truly global feel to Sankeys, and travelling to New York is a long held dream for its founder.

David Vincent, Sankeys’ creative visionary, explains that,
“Working alongside the same team (Antonio Piacquadio, Paolo Angelo and Rob Toma) that helped me make Sankeys Ibiza become another world-respected nightclub, I am very much looking forward to creating a new nightclub for New York. I have always wanted to live and open a club in my favourite city in the world since I went to Vinyl to see Danny Tenaglia in the early 2000s”

I really cannot wait to finally bring a lot of new music and artistes to the city that taught me about what house music really means. If we can achieve even half what the great clubs like Sound Factory, Paradise Garage and Tunnel did for the city then I will be more than happy.  We have waited three years for this project to finally become a reality. Hopefully it will be worth the wait.”