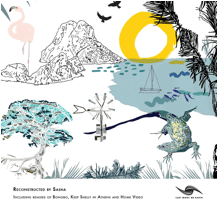 Sasha has remained cutting edge in the dance music scene through his own belief in evolution of music, listening to new sounds by new artists and only reconstructing and working on the most progressive tracks.

‘Reconstructed by Sasha’ is his first release since his #1 album Involv3r. This highly anticipated EP once again puts Sasha’s own twist on three beautiful pieces of music, which are all outtakes from the world-renowned Involv3r series.

The EP has already received much love from numerous other highly respected DJs and producers such as Scuba, Noir, Dubfire, Adam Beyer, Huxley, Maceo Plex and Shadow Child. The tracks on the EP were described as incredible, exceptional, beautiful and breath-taking. This once again shows that Sasha is not just an icon amongst his fans but also amongst his fellow artists.