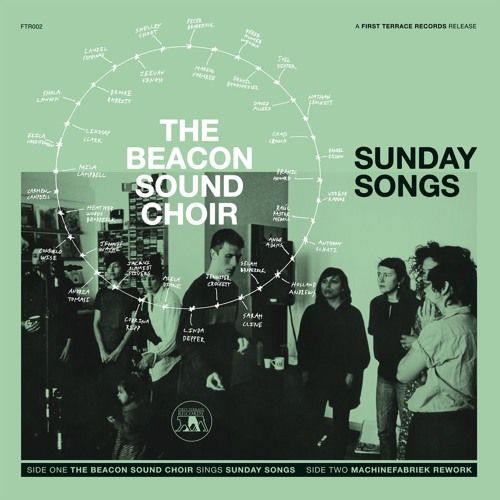 First Terrace Records present Sea Of Voices, a sprawling ambient piece from the endlessly inventive Machinefabriek, which he describes as “a patchwork, connecting and expanding the more dreamlike parts of Sunday Songs into a sea of voices, where it’s unclear where one voice stops and the other begins.”

Sea Of Voices makes up side-B of Sunday Songs and sits beautifully in contrast to the organic ambience of the 7 tracks that make up side-A. It is in some ways inspired by the work of Renaissance composer Josquin des Prez, as Machinefabriek explains “When I discovered his choir music not so long ago, I realised that ambient music already existed around the 1500’s”.

The Beacon Sound Choir was founded by Peter Broderick, and features other luminaries from Portland’s alt folk scene such as Alela Diane, Vikesh Kapoor and Holland Andrews (Like a Villain), the latter of whom wrote Fortunate Ones, the gently breathtaking first single off Sunday Songs released 5 June 2017. [listen here]
The Beacon Sound Choir is one of Broderick’s most ambitious and avant-garde projects to date. Utilising the harmonies of a 35 strong choir, Sunday Songs plays out with an almost religious undercurrent; the product of individuals inspired to commit a divine act of collaboration, recalling the rare splendour of a community in seamless alliance.

Sunday Songs will be released 16th June 2017 via First Terrace Records on LP and digital formats, including a limited run of green LPs.