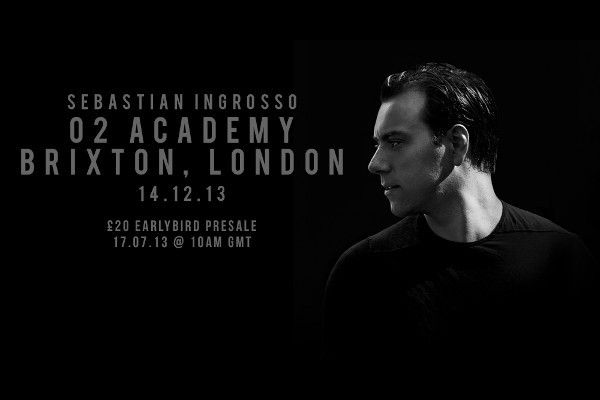 Refune Records founder/label boss – and one third of world-dominating, electronic superstars Swedish House Mafia, Sebastian Ingrosso has announced he will headline London’s infamous O2 Academy Brixton on Saturday 14th December 2013 as a thank you to the fans for the incredible success of his single ‘Reload’, which is  currently charting at #3 in the official UK midweek charts.

Before the announcement Sebastian Ingrosso joined his fans online for an exclusive Twitter Chat live from Ibiza, where Departures – his weekly pool party with long-time friend Axwell – was in full swing. #reloadchat trended globally at Number 1 on Twitter throughout and caused a Twitter Meltdown when the service temporarily blocked him from tweeting and making his big announcement!

Finally it was revealed that Sebastian would be headlining the very place where Swedish House Mafia had their monumental show back in 2009.

Starting life as an instrumental last year, ‘Reload’ stormed in at #1 on The Beatport Charts, Sebastian Ingrosso teamed up with rising star, Tommy Trash and now also with long time lyrical collaborator John Martin, for ‘Reload’, which is currently A listed at Radio 1, and has racked up almost 4 million views on You Tube with the official video.

An exclusive O2 and fan presale will begin on Wednesday 17th July from 10am. Register now via http://www.sebastianingrosso.com/brixton. Tickets will go on general sale at 10am on Friday 19th July.