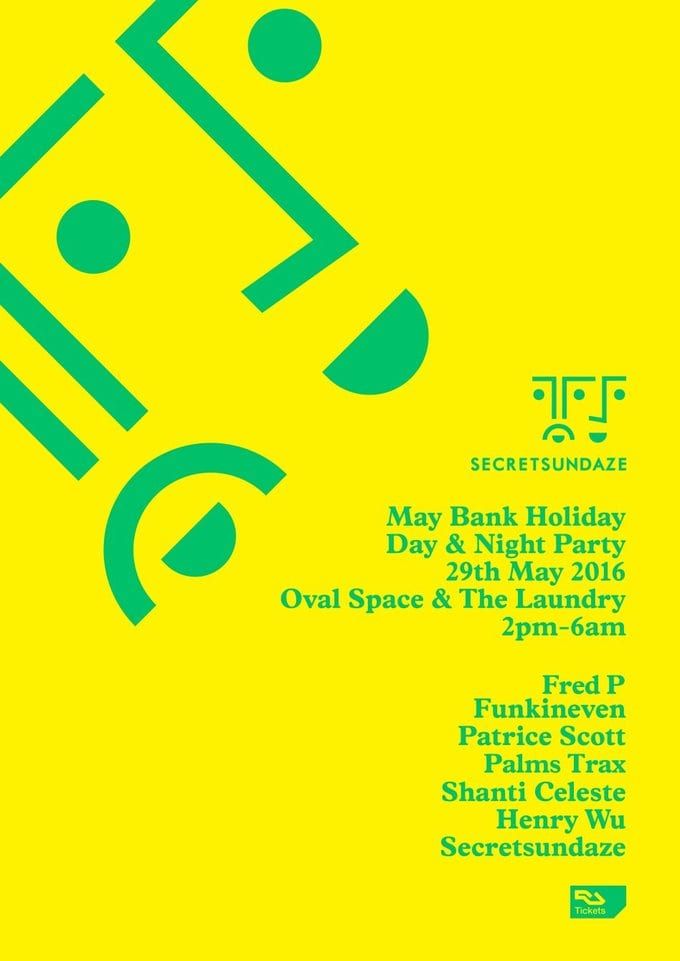 After a stupendously good start to the Summer season at St John's Church, secretsundaze return with another finely tuned party on Sunday 29th May – the second bank holiday of British summer time. By day, Oval Space will play host to acts including Fred P, Palms Trax and Shanti Celeste. With its two terraces and huge full length window that allows natural daylight to flood the room, the venue is a firm favourite of many and ideal for the daytime session. By night, the party heads around the corner to The Laundry in London Fields, where Patrice Scott, Funkineven, Henry Wu and of course Secretsundaze, will be putting the fantastic new L'Acoustic soundstystem through its paces.

Fred P
Headlining the party is the one and only Fred P. Both his DJing and productions are the epitome of real deep house – sometimes hypnotic, sometimes dark but always soulful. As a producer he is prolific and has an incredible strike rate through his various monikers Fred P, Black Jazz Consortium or Anomaly.

Patrice Scott
Another regular at Secretsundaze, Patrice has been on fire of late, playing at many of the best clubs worldwide from Output in NYC to Panorama Bar in Berlin. His DJing is of the highest order, dropping many undiscovered gems from the deep house style many have come to expect from him but also touching on a more techno sound at times. He always brings the heat!

Funkineven
Funkineven is one of London's most charismatic artists with his fresh, raw, off kilter vibes that are hard to pin down but totally on the money. With his monthly show on NTS, releases on Eglo, Broadwalk and his own highly regarded label Apron records, his star is sure to rise further with the release of his LP in the coming months.

Palms Trax
Palms Trax will make his Secretsundaze debut! Emanating from the UK but now residing in Berlin he's gained notoriety though excellent releases on the likes of Lobster Theremin and Dekmantel, not to mention killer DJs sets across Europe. Check out his radio show “Cooking With Palms Trax' on Berlin Community radio where he shows his great taste in music across the board.

Shanti Celeste
Bristol based Shanti is another firm favourite having released the Alma EP on Secretsundaze in 2015 and has spun at the party twice now killing it each time. She has released on the likes of Apron, Future Times and BRSTL and has a monthly show on NTS Radio.

Henry Wu
Henry Wu has been making waves of late, with a sound that moves between jazz, funk to more contemporary house. His music has been picked up on by the likes of Floating Points and Alex's Nut's Eglo imprint and Bradley Zero's much hyped 'Rhythm Section'.

Secretsundaze
Secretsundaze continue to fly the flag into their 15th year of parties in the capital. As DJs their tour schedule over the next fre months takes in Munich, Tokyo, Sardinia, Barcelona, Bucharest, Lyon, Found, Gottwood, Glastonbury, Hideout and Electric Elephant to name a few.

So the scene is set for another killer bank holiday party with some of the finest selectors on the planet. Tickets from £12.50 available now at www.residentadvisor.net/event.aspx?784686

Saturday 14th May 2016
Secretsundaze All Night Long at The Pickle Factory, London