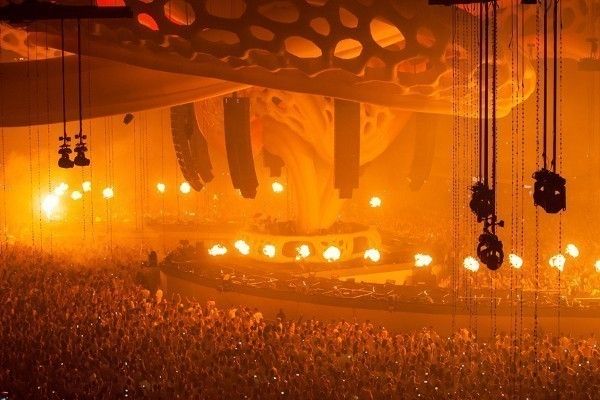 Tonight some 40,000 dance enthusiasts from more than 75 countries experienced the world premiere of the new Sensation show ‘Into the Wild’. The show, which sold out several months ago already, is about the hunt between men and women and the animal instinct that takes over during this pursuit. The Dutch premiere is the kick-off of the international tour, which comprises over 20 countries. In accordance with tradition, an auction was organised with dance4life prior to the show. The auction’s proceeds, together with the fixed donation from ticket sales, among other things, raised a total amount of € 323,600.

Snakes and prowling eyes
The Amsterdam ArenA was temporarily converted into a futuristic urban jungle full of special effects, acrobatics, fire shows and music performed by international stars like Fedde Le Grand, Nicky Romero and Mark Knight. The two giant, illuminated, sensually entwined snakes wrapping themselves around the DJ booth were eye-catching to say the least.  Also noticeable were the double lasers glowing over the audience like two prowling eyes in the night, looking for their prey. Thanks to special wristbands that could be remotely controlled via RFID, everyone in the audience literally and figuratively became a part of various lightshows. All sorts of shapes could be projected across the entire field with the wristbands that every visitor wore. “Each wristband emits its own colour at the right place. We can see precisely where each wristband is located in the field. By lighting up the right wristbands in the right colour, you can create any form,” says Thom Bartelse, Marketing Manager Sensation.

DJs incite the hunt
“The DJs had to work their way up to a climax where the audience was transported from the beginning to the end of the seductive hunt between men and women. A different musical style is needed to convey the awakening of our inner wild animal looking for prey than for the apex that designates two people rushing at each other with the utmost animal lust,” says Erick Eerdhuizen, Music Director at Sensation. “Each DJ communicates a different feeling that fits precisely with the story that we want to tell that evening – in this case, the hunt between men and women.” Our own Nicky Romero, Fedde Le Grand and the duo comprised of Sunnery James and Ryan Marciano manned the turntables. Completing the line-up were Nic Fanciulli and Mark Knight together with Sensation icon Mr. White.

Doutzen accepts € 117,600 for dance4life
Before the evening began, an auction was once again organised this year together with dance4life, with the proceeds going to the organisation that provides youth worldwide with education about sex, HIV and AIDS. Under the leadership of Ambassador Doutzen Kroes, €117,600 was collected. Together with, among other things, the fixed donation from each Sensation ticket sold (€ 0.50 of each Sensation Amsterdam ticket goes to dance4life), that total amount of € 323,600 was raised this year. Some items for bid at the auction were a styling session by Nikkie Plessen, a lunch with Minister Ploumen and Victoria’s Secret clothing from Doutzen Kroes.

About Sensation
What began as a one-time event in the Amsterdam ArenA in 2000 has now become an international phenomenon with versions in more than 20 countries. Sensation always makes good on its name with topics that involve the public by means of the white dress code. The concept won awards for ‘best event of the year’ in the Netherlands, Germany, Australia, Brazil and Denmark, among other places. Sensation uses the positive power of music and dance as a universal language that connects millions of people. In addition to music and dance, Sensation is about fashion, science (technology and special effects) and sustainability. As a social partner, Sensation supports dance4life in the fight to stop the spread of HIV and AIDS. See also: www.Sensation.com