Irish dance music breakout star Shane Codd has dropped a live performance video for his hit debut single ‘Get Out My Head’, out now.

Shot in London, the live video of ‘Get Out My Head’ showcases a stunning vocal performance from Solah, who features across the original, alongside a live mix from Shane Codd himself. The feel-good energy of the live performance perfectly encapsulates the floor-filler nature of the track, a taste of what’s to come as we look towards a possible festival season this year.

Shane Codd burst onto the scene with his 2020 debut single ‘Get Out My Head’, which has amassed over 85 million streams and counting, gone 2x platinum in his native Ireland, Top 40 placements in Belgium and Netherlands, and broken into the UK Official Chart Top 10, peaking at #6. The global hit has been heavily supported by an array of tastemakers including Capital FM selector’s Coco Cole and Mistajam, KISS FM’s Charlie Tee and BBC Radio 1’s Scott Mills. It has also achieved #1 at US Dance Radio, alongside endless support from the likes of NRJ, SLAM! FM and Das Ding.

Shane previously explained: “I wanted to get out and do things and I also wanted the stress of covid out of my head, like I’m sure a lot of us did. The vocals really sat with me, making the track was like an escape for me. I remember the first time I played in it my car I got a release and a feel good vibe of it. I imagined festivals and people dancing, which felt like a distant memory during covid.”

Heavily influenced by the 90s and early-2000s dance sound, Shane’s first big break came when he became a finalist at the 2018 ‘Breakout Producer’ competition, held by famous Irish DJ Mark McCabe. He has since performed in cities and towns across his homeland, also receiving airplay from popular national station SPIN 1038.

Shane Codd recaptures the euphoric vocal-house banger, giving an insight into what we can expect from the talented artist with his highly anticipated headline gigs this summer. 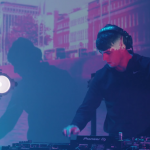