Australian bass producer ShockOne returns with “Run,” featuring The Bloody Beetroots, the premier single from his highly anticipated second studio album. He has been quiet on the LP front since the 2013′s release of his critically acclaimed “Universus” album, but the new track proves that ShockOne has only sharpened his production prowess with time. From the moment that “Run” opens with undulating, cinematic synths with hints of heavy metal, you know you’re in for a wild ride; the drop delivers driving basslines and ominous vocal clips, building a dystopian atmosphere that is depicted in stunning visuals in its accompanying music video. Watch the “Run” music video as ShockOne unfurls complex and creepily poignant footage, hinting that sometimes the darkest parts of ourselves are more frightening than anything in the outside world. Keep an eye out for the full release of “A Dark Machine” LP on August 01 on Monstercat, for which ShockOne draws inspiration from the soundtracks of producers like Giorgio Moroder, Vangelis and the scores to old school slasher flicks from John Carpenter.

“I couldn’t be happier to join the Monstercat roster. It’s a brand known for pushing boundaries and a label releasing some of the most forward-thinking releases for my genre of music. It really is the perfect home for A Dark Machine and excited to have them work this record to every corner of the world alongside my long term home label Warner Music.” – ShockOne

Since his debut in 2009 with “The ShockOne” EP, Karl Thomas has established himself as one of the most exciting bass artists in the scene. He followed up his massively successful debut with 2011‘s “Crucify Me,” a drum & bass/dubstep anthem in which he also showed his versatility and talent as a vocalist; this single served as a preview for his first album “Universus.” ShockOne‘s most significant break came in 2012, when he released the genre-bending, now-iconic work of art that is “Chaos Theory” featuring Corey Burton. “Chaos Theory” experienced astronomical success, peaking at #2 on Beatport, #1 on Trackitdown, and #1on iTunes Dance in Australia. This led him through a whirlwind of touring, playing festivals such as Creamfields, the Big Day Out, and Stereosonic, and playing sold out shows throughout Australia. After listening to “Run” we have no doubt that “A Dark Machine” will introduce us to a ShockOne who is bigger, better, stronger than ever before. 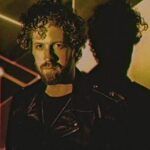