Showtek & LIIV Drop ‘Live In A Bubble’ Via Virgin Records

Showtek & LIIV Drop ‘Live In A Bubble’ Via Virgin Records

Revered DJ/producer duo Showtek return this year with ‘Live In A Bubble’, another highly-anticipated single featuring vocals from Los Angeles-based singer/songwriter LIIV. The EDM titans’ new tune directly follows up ‘Pour It Down’ with VÉRITÉ from the tail end of this January, in addition to LIIV’s 2019 collaboration with Gold Brother ‘Before You Do It Again’. Out now via Universal Music, ‘Live In A Bubble’ is available to listen to across all streaming platforms.

The three-minute sonic journey begins with shimmering production elements, lulling the listener into a atmospherically heady daze with each passing second. The textured singing flows throughout the track’s entirety, and is eventually paired alongside a pulsating piano house beat. Rife with emotion from start-to-finish, the song details in-full the fragility of human connectedness and its intricacies — ‘love is a bombshell ready to drop’, and ‘we live in a bubble ready to pop’ is repeated throughout, effectively relaying this core message. Entrancing and rhythmic, the hard-hitting basslines and LIIV’s flawlessly-executed vocal performance round out the remainder of the infectiously enticing original production. In all, the collaborative radio-friendly dance-pop masterpiece serves as an exciting new addition to both prolific artists’ discographies.

ABOUT LIIV — LIIV is a songwriter hailing from Honolu, and currently residing in Los Angeles. She started her career in a punk band which organically evolved into pop songwriting for both herself and outside artists, such as Tove Lo, MØ, Halsey, Cyndi Lauper, and UPSAHL. Some of her recent collaborators include Pete Nappi, Jenna Andrews, DCF, Leah Kate, Kat Cunning, Jack Laboz, Chris Lyon, Jesse Fink, Sarah Barrios, Pom Pom, and many others. LIIV and Wouter initially met each other in Brooklyn, New York at a music writing session, and since they have been working on numerous songs together — ‘Live In A Bubble’ marks the first release of their collaborations.

ABOUT SHOWTEK — Showtek is a revered Dutch DJ/producer duo consisting of Wouter Janssen and Sjoerd Janssen, who’ve been actively producing their unique take on dance music since 2001. The brothers dominated the underground hardstyle scene until 2011. They were most known for their songs,  ‘FTS’ , ‘The Colours Of The Harder Style’ and ‘Black’, just to name a few. After a decade of being on top of the hardstyle scene, selling out solo shows and releasing two artists albums it was time for a change and a new challenge.

The following year, their style of dance music slightly shifted with the onset of the EDM boom, which paid off in the form of multiple groundbreaking smash hits. These include 2012’s collaborative track with Hardwell, ‘How We Do’, 2013’s ‘Get Loose’, ‘Cannonball’, ‘Booyah’, ‘We Like To Party’, 2014’s ‘Bouncer’, and platinum-awarded ‘Bad’ with David Guetta and VASSY, all of which currently collectively sit at an impressive 564,000,000 combined streams via Spotify and almost 1 billion views on YouTube to-date. Nearing two decades since their inception, this well-established act is now creatively pursuing the world of pop in full force, with a worldly, culturally-infused urban flair. 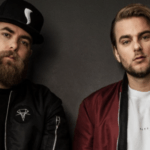