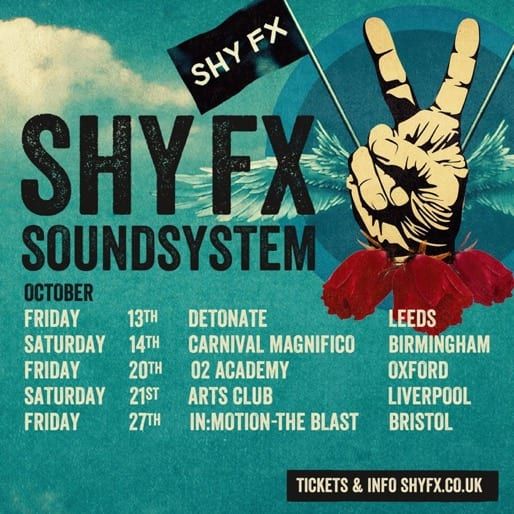 Legendary DJ and producer Andre Williams, aka Shy FX has today announced his upcoming tour. Billed as Soundsystem, you can expect to feel the vibes that only Shy FX is so good at, with his genre crossing, bass heavy party music with added bells and whistle, carnival style.

The 5-date UK tour starting this October, begins in Leeds on Friday 13th October.  This tour follows an amazing summer playing Reading, Leeds, Boomtown and Love Saves the Day festival and culminating in Shy hosting an incredible stage at Notting Hill Carnival. Shy will now be taking his Soundsystem experience on tour, so if you missed out or want more of this unforgettable experience you can catch it in Leeds, Birmingham, Oxford, Liverpool and Bristol.

With the Soundsystem acting as immersive live show experience, fans can expect a full-on attack on the senses, both visually and sonically, as Shy displays the energetic vibrancy his live performances have become famed for.

The tour announcement comes hot off the heels of the release of ‘Chocolate’, his latest original single produced with Breakage and featuring Roses Gabor and Ghetts.

Premiered by Annie Mac as her ‘Hottest Record’ as well as Mistajam’s ‘Jam Hot’ track, the production features the enticing vocals of Roses Gabor, who has contributed to many songs, most notably with the Gorillaz. Ghetts also lends his signature, quick-fire biting vocals to the track, backed by a hefty bassline from producer Breakage. A key player in UK grime scene, Ghetts is the brain behind grime collective ’The Movement’ which included artists like Devlin, Wretch 32 and Scorcher.

Shy FX has proved his status as a tastemaker and innovativer time and time again with his constantly evolving sound, and will be sure to only cement this further during his electric 5-date ‘Soundsystem’ tour.