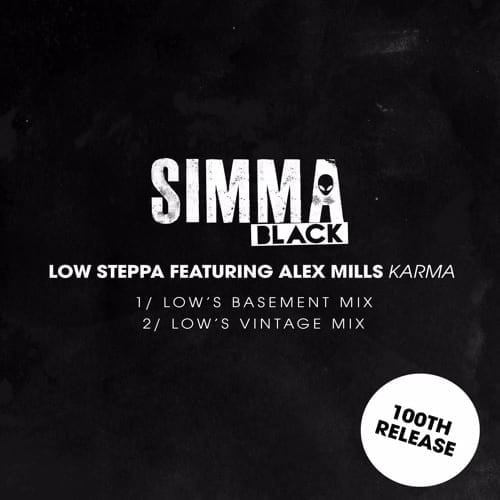 Since its launch in 2013, Simma Black has been a leading force in championing UK house music. Now founder Low Steppa celebrates their 100threlease with a sublime house cut featuring vocals from Alex Mills.

Over the past few years, a new style of house has become a prominent force in electronic music, to the point that, especially in the UK, it’s difficult to imagine a time when low-end wobbles and hard-hitting drops weren’t a feature of the scene. During its explosion in popularity, there have been a select number of labels and artists who have been front and centre of the movement, and none more so than Simma Black and Low Steppa.

‘Karma’ is a fitting record for the label’s 100th release, encapsulating much of what has made the label so popular over the last four years, while also hinting towards a subtle gearshift from Low Steppa.  His trademark throbbing bass punches as powerfully as ever, but with Mills’ soulful vocal and focus on melody, there’s an intricacy in ‘Karma’ that should delight house music fans across the board.

Producer, DJ and label boss, Low Steppa is a musical force to be reckoned with. From his recent stellar remix of Sonny Fodera ‘Always Gonna Be’ and growing presence at Defected In The House shows, to his Rinse FM show and of course Simma Black, Low Steppa is about as relevant and in-demand a DJ and producer as its possible to be.

“I started Simma as an outlet for my own music as I was kind of doing my own thing and I've never been one to try and make a certain record to be on a certain label. The label has really grown since then, releasing music from so many artists I admire, and releasing Full Intention is one of the highlights so far for me as they are heroes of mine.

“I’ve been loving Alex Mills’ work for ages so was really cool to get to work with her on ‘Karma’.  I had no doubt she would absolutely smash it.” Low Steppa

Alex Mills’ is one of the UK’s most unique singers, and has fast become the go-to collaborator for many of the world’s foremost producers, with Jonas Blue, Wiley and Basement Jaxx just some of those who have enlisted her sizeable talent.

‘Karma’ is the first collaboration between these artists, but considering the results is unlikely to be their last.

Karma is out 14 August on Simma Black