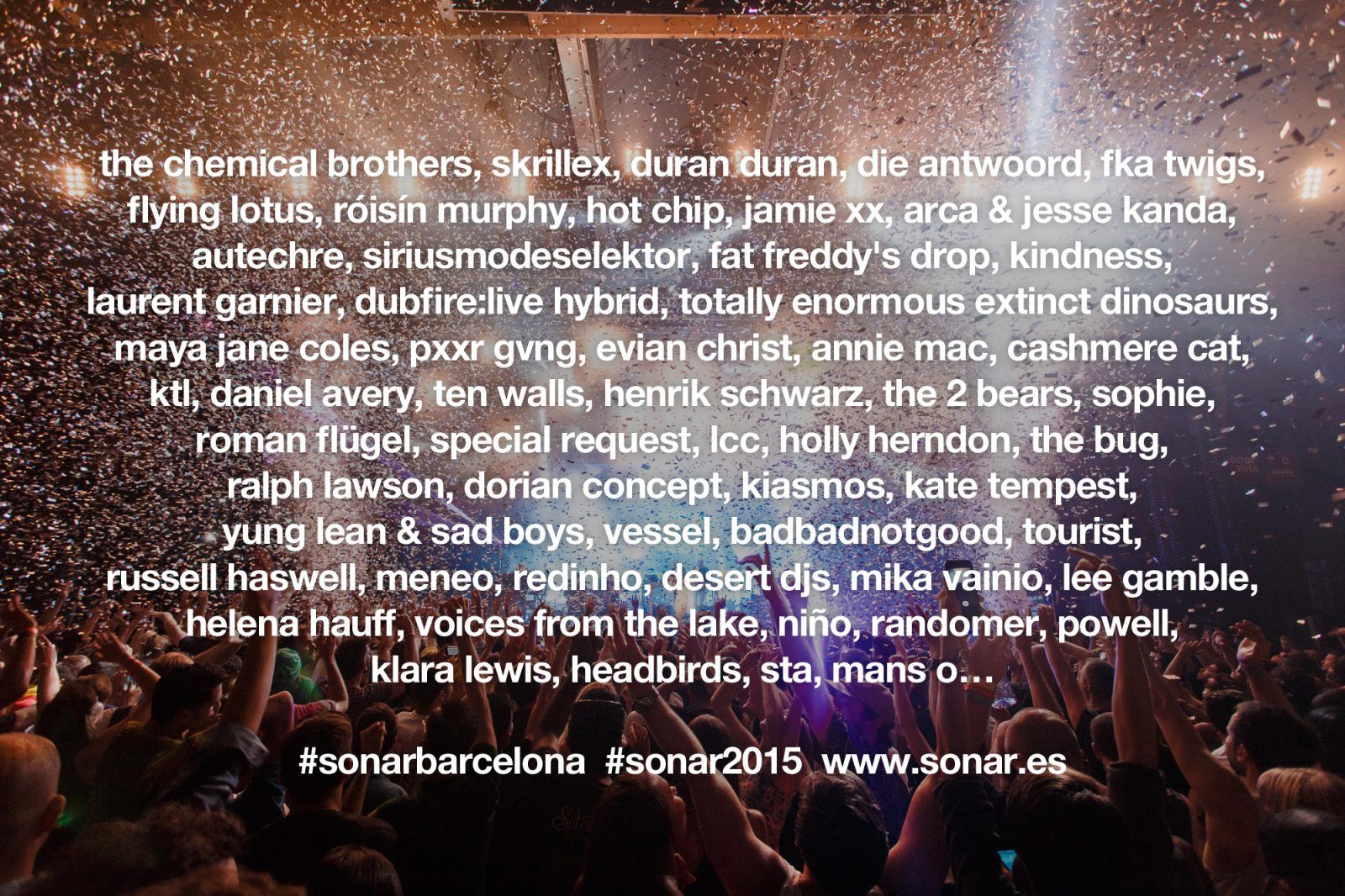 Sónar Barcelona 2015 extends the line-up of its 22nd edition to include 38 new names, featuring key artists of contemporary electronica to add to those announced some weeks ago.

The festival will present one of the brightest talents of today’s music, British FKA twigs, a producer, arranger and vocalist of exceptional talent, whose futuristic pop sound has taken her to the top of many ‘best of 2014’ lists. The South African duo Die Antwoord also break new ground, with their incredible collection of hits, a new show featuring extreme visual imagery and their usual powerful stage presence.

Flying Lotus, a genius who weaves hip hop and cosmic jazz, will present “You’re Dead” with an extraordinary 3D show, whilst Venezuelan Arca, the undisputed producer of the moment (he’s behind the recent work of Björk, Kanye West and FKA twigs) will unveil his exclusive and much awaited audiovisual show in collaboration with video artist Jess Kanda.

Two other world-renowned names make it into the list: Skrillex, probably the most charismatic and popular artist in international electronica today, and Jamie xx, one of the subtlest House stylists in the world.

Of course, two other giants of electronic music history have already been confirmed: The Chemical Brothers (premiering an album and a show) and Autechre, living legends of abstract beats and godfathers of IDM.

Pop with synthetic melodies and glowing outlines will be a major pillar of the Sónar 2015 program, with divas like the Irish Roísín Murphy who, after 8 years of silence, makes her comeback with a new LP and her usual dose of glamour and charisma; Hot Chip, who will present their new album twice – once at Day Sónar and once at Night Sónar.

Iconic British and worldwide chart-toppers Duran Duran will headine and make their first ever Sónar appearance, presenting an incredible live set, comprising material from across their extraordinary career(“Girls On Film”, “Notorious”, “The Reflex”, “Wild Boys”…). Currently working on a new record with super-star producers Mark Ronson, Nile Rodgers and Mr. Hudson, this new body of work promises to be one of their best yet. The group’s appearance at Sónar will be one of only a handful of performances in advance of their upcoming record release, making the show particularly special.

To those outstanding presences we must add the performances of Kate Tempest, Fat Freddy’s Drop, Kindness, Sophie and Tourist, each of them finding their own language within the broader scene of contemporary pop, adding to their basic style a selection of elements from electronica, dub, soul and spoken word.

Sónar wouldn’t be Sónar without its research into the best of advanced techno, exploratory electronica and avant-garde music, well represented by artists like Mika Vainio (one of the most respected sound researchers of the last 20 years); young master Powell, head of the Diagonal label; the relentless Kevin Martin with the industrial and urban sounds of The Bug; Randomer’s robust dancefloor techno and STA’s superb contemporary dub.

Austrian label Mego and its showcase deserve a special mention. A heavyweight in experimental music over the last 20 years, they will present five of the artists that best represent their current approach: KTL (Pita + Stephen O’Malley), Italians Voices From the Lake, the veteran master of noise Russell Haswell, the first-timer Klara Lewis and Spaniards LCC (formerly known as Las CasiCasiotone).

Ready for the floor

Amongst the newcomers for Sónar 2015 are several dance floor masters, bringing class and sophistication to contemporary dance music.

This is the case of Laurent Garnier, top DJ and Sónar headliner since its early days;  superproducer and DJ Roman Flügel from Frankfurt, riding high at the peak of his career; Siriusmodeselector, the new live project by Modeselector and Siriusmo and visual creators Pfadfinderei; the euphoric house-pop of The 2 Bears; the talented Headbirds, with new songs and their excellent live bass-house; Paul Woolford and his Jungle project, Special Request; the always exciting Totally Enormous Extinct Dinosaurs;  safe pairs of hands like Henrik Schwarz (who will close Sónar Village on Saturday), Ralph Lawson (2020Vision owner), Dubfire (with new audiovisual show), Maya Jane Coles (purest elegance on the decks) or the BBC Radio1 star Annie Mac.

As well as the Icelandic duo Kiasmos, headed by Ólafur Arnalds with an excellent first album of danceable and emotional techno; the young but already renowed British DJ Daniel Avery and the intense and disarming tech-house of Lithuanian Ten Walls.

Hip hop’s beats and rhymes, powerful dubstep bass and the new trap are the foundations for most of today’s more interesting music. Those are also the sources of inspiration for several of the most prominent artists of this year’s line-up: Dorian Concept and Cashmere Cat, two virtuosos of beats, synth and keyboards; Yung Lean & Sad Boys, with their refreshing and narcotic trap; and the avant-jazz trio Badbadnotgood, regular collaborators of hip hop stars like Ghostface, Tyler The Creator and MF Doom.

Barcelonan duo Desert will show their influences with one of their surprising sessions, whilst Redinho and Meneo will both offer vibrant gigs based respectively on Funk and Electronic cumbia.

On top of that, we have to mention national trap collective PXXR GVNG, Evian Christ’s infectious beats (with their amazing light and smoke live performance) the elegance and originality of Niño, the kid that’s growing up fast, and the new hybrid forms of the young Catalan producer Mans O.