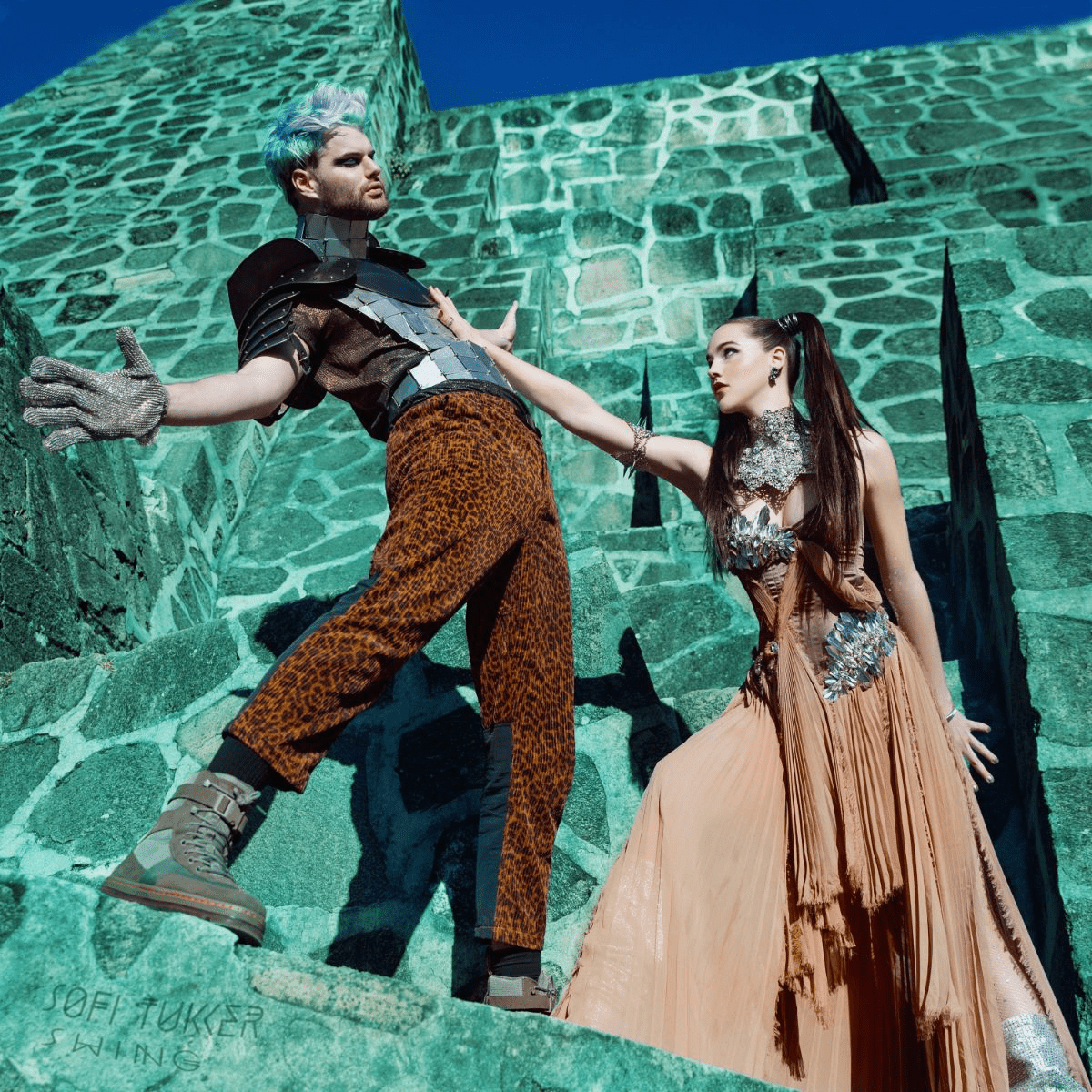 Sofi Tukker have announced they will release the R.I.P. Shame, Pt. 1 EP on 20th September. This is the follow up to their GRAMMY-nominated debut album Treehouse. The group has also shared a new single and video from the EP for “Swing”, a crowd favourite at their live shows.

A dramatic widescreen string arrangement befitting of Wagner starts off“Swing” and gives way to a relentless rhythm that is almost martial at times as the duo trades verses in Brazilian Portuguese adapted from a poem by their longtime collaborator Chacal. The group worked with director Charles Todd of Scheme Engine, who previously directed “Fantasy” and has collaborated with Jay-Z, Troye Sivan and Harry Styles, to bring the epic ”Swing” to life. The group invites you deeper into their fantastical world as they embody warriors battling each other in a mountaintop arena, sharpening their super-natural powers with an incantation from a mystical book. “Swing” was shot on location at Centro Ceremonial Otomí in Temoaya. Nestled in the picturesque mountains of Toluca, Mexico, the ceremonial square was erected in 1980 as a tribute to the Otomi people and culture by then governor of Mexico, Jorge Jiménez Cantú.

SOFI TUKKER says of “Swing”, “This song always felt like an epic battle song. It’s more like a chant than a song, really. It’s called “swing”because we literally swing the song after Tuck says that. We collaborated with the Brazilian poet, Chacal, and the words are about words!! Like a lot of the things we do with Chacal, part of the meaning of it is just how nonsensical it is. It’s really about how delicious and delightful and also meaningless words ultimately are.”

They add regarding the EP, “We have realized over the past year or two of touring that the thing we really want to offer to the world is a feeling of being in community in joy and celebration. We are living in a time when people are increasingly isolated and that’s where shame can grow and fester and ultimately kill our spirits. Our goal is to kill shame, set our spirits free, and be together! That is the common thread throughout the EP and throughout the next phase of our creations.”

The group recently announced the R.I.P. Shame World Tour which will bring the duo across North America and Europe following the EP release this fall. Sophie Hawley-Weld and Tucker Halpern are on “a mission to kill shame one loose dance party at a time,” with Australian dance outfit Haiku Hands and DJ/producer LP Giobbi supporting all North American dates. Tickets for all tour dates are on sale now at www.sofitukker.com/tour.

SOFI TUKKER – “R.I.P. Shame, Pt. 1” Tracklist:
1. Swing
2. Playa Grande (w/ Bomba Estéreo)
3. Ringless
4. Purple Hat
5. Fantasy
6. Like ThisMore about SOFI TUKKER:
SOFI TUKKER is the genre-defying duo of Sophie Hawley-Weld and Tucker Halpern celebrated for their inclusive and global perspective on electronic music and their work’s themes of liberation, unity, and self-empowerment. Their debut single ‘Drinkee’ was nominated for a Best Dance Recording Grammy,®which was followed by a Best Dance/Electronic Album Grammy® nomination for their debut albumTreehouse. SOFI TUKKER‘s records have achieved Gold or Platinum status on every continent other than Antarctica. Their electric and energetic live show has sold out venues and graced major festival stages across the planet, and SOFI TUKKER has also performed on major TV shows such as The Tonight Show Starring Jimmy Fallon (USA), X-Factor (Italy), Sunday Brunch UK), Late Show (Russia) and BuzzRhythm (Japan). SOFI TUKKER are also passionate activists who have raised funds and awareness for Planned Parenthood, The Trevor Project, and the March for Our Lives.