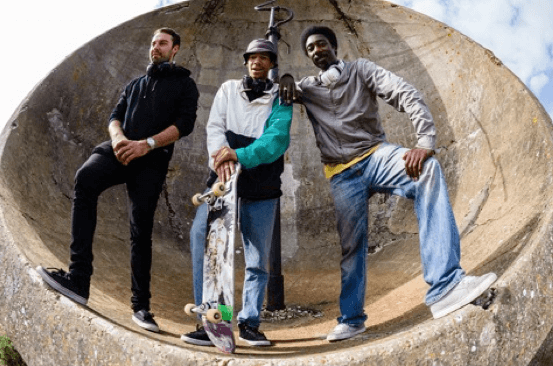 This October, Sony has brought together three of the most exciting names in music, film and skating in a unique collaboration to celebrate the launch of its revolutionary 3-in-1 Walkman WH Series. This unique product brings together the best of Sony; a digital music player, speakers and headphones in one wire-free design. The partnership of Amsterdam- based house producer Breach, professional skateboarder turned filmmaker Winstan Whitter, and the UK’s hottest skateboarder, Lucien Clarke, is set to create a unique track and film inspired by the movement and freedom of skateboarding.

Breach has created the exclusive new track ‘Grey Matter’– which is available to stream and download free from the 10th October* soundcloud.com/breach-uk – using recorded sounds from Lucien skating and taking inspiration from the collaborators’ shared love of skateboarding.

The track will also provide the soundtrack to Winstan Whitter’s film – available at https://www.youtube.com/SonyUK, which takes viewers on a visual and sonic journey with Lucien Clarke. Winstan’s camera moves alongside Lucien weaving through the cityscape of London, taking the viewer with them to one of the UK’s most striking acoustic settings – the Sound Mirrors also known as the ‘Listening Ears’ in Denge. Throughout the film, Lucien wears the new Sony 3-in-1 using each of the three modes – downloading music onto the MP3, listening to the headphones and then wearing them round his neck on speaker mode. The film also features cameo appearances from all three collaborators.

The WH Series Walkman is a new concept for enjoying music; the pure sound of high performance headphones, personal surround sound with one touch to the built-in speakers, 20 hours of battery life, and up to 16GB of built-in storage – that’s enough for up to 4,000 tracks.** It brings together years of audio and headphones expertise from Sony to offer studio sound and comfortable listening on the move.

The new Walkman NWZ-WH505 and NWZ-WH303 models can also be plugged in using the supplied cable to listen to music, radio or Internet streaming straight from smartphones or tablets. Users can switch between sound modes for dynamic, enhanced bass or clear, sustained mid-to-high range vocals.

Breach, aka Ben Westbeech is the man behind this summer’s huge Top 10 hit ‘Jack’ which was signed to Atlantic Records. Ben is a keen skater originally from Bristol and now based in Amsterdam. His next single ‘Everything You Never Had (We Had It All) Feat. Andreya Triana’ is set for release 10th November via Atlantic. The single has already garnered specialist support from Radio 1’s Annie Mac and Zane Lowe. Added to that is his addition as part of the highly respected DJ Kicks compilation series, which has been compiled and mixed by Breach and is due out this autumn.

Hackney-born Winstan Whitter is a professional skateboarder turned filmmaker. Born in Ghana and raised in London, his work has related to his experience and history, ranging from documentaries on herbal doctors in Ghana to music videos for Dizzee Rascal to Rollin Through the Decades, a documentary about the history of British skateboarding.

Lucien Clarke is one of the UK’s hottest Pro-Skaters and is part of the Palace, Supra, KR3W European Skateboarding teams. He was born in Jamaica but has lived in London since he was five.

 The Sony 3-in-1 track and film will be available to download from 11th October.

The new WH303 and WH505 Series Walkman models will be available from October, priced at £99 and £179 respectively from www.sony.co.uk.