Sophia Amato is pleased to announce that her debut single Glorious Mess, is out today Friday 20th August 2020. LISTEN HERE.  The Sicilian newcomers’ first offering is pure lo-fi electronic ear candy; a theatrical lyrical backdrop and sultry vocals stir over subtle production and a simmering hip hop beat. Sophia Amato has a fresh take on new wave electronic soul, delivering a unique kind of dreamlike groove that the London-based singer is keen to make her signature.

“This song about finding solace and strength after a period of being reckless and wild following a break up. It’s a reflection on the morning after the night before”– Sophia Amato

Sophia Amato is a London-based singer and songwriter who originates from Sicily. Spending the past few years between London and New York, Sophia fell in love with the art and Jazz scenes she discovered on her travels. Sophia has developed her own music that includes a kaleidoscope of these elements, as well as soul, pop and contemporary R&B. Sophia is currently in the studio working with writers and producers such as Bastian (Jess Glynne, Jessie Ware), Lapsley, Karma Kid (aka Shy Luv), Cutfather (Birds Of Prey), Dan Caplen (Clean Bandit, Macklemore) and John Foyle (FKA Twigs). 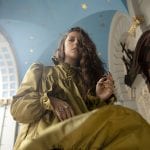