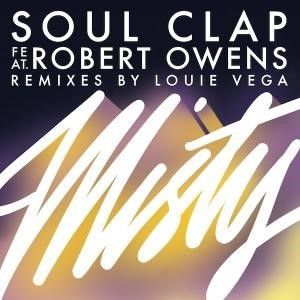 Finally the moment has arrived for us to release new original music on our own label! This monster release has a history that takes us back more than four years to a 48 hour studio session at our beloved Marcy Hotel in Brooklyn, NY. The original collaborative effort came from a laundry list of familiar Crew Love players including Soul Clap´s Charlie and Eli, Wolf + Lamb´s Gadi Mizrahi, No Regular Play´s Greg Paulus, the lovely Deniz Kurtel and even Mr. Fantastic himself, Lee Curtiss. After all was said and done the body and inspiration of the record was there but what was lacking was a strong vocal. Enter Robert Owens, arguably one of the most prolific and sonically recognizable singers in House music PERIOD. Soul Clap and Robert first met at the Garden Festival in Croatia in 2011 and had discussed writing music together ever since. Finally a date to record was booked at Alex Morris´ Invader Music studios in London. Robert took Charlie´s original vocal idea, written about a relationship gone awry and expanded it into a full on beautiful expression of heartbreak in his timeless style.

This has been the story of how the Deep Mix was born, but we knew that we needed something for the club, so while on tour in Japan Eli stripped the session down to the bare essentials and added a killer bassline, Charlie wrote piano parts, pads from the Jupiter 6 and the Club Mix pieced itself together. Once Crew Love´s Tanner Ross caught wind of the project he wanted in, hit the studio and delivered one of his signature explorations in bizarre musical minimalism with the added help of Greg Paulus on trumpet.

For such an important release, we couldn’t stop there and we reached out to our new friend and musical idol “Little” Louie Vega, who called the vocal “vintage Robert”, then he blessed us with THREE magically unique journeys from rough and tough, to dancefloor deepness. One of these mixes and an instrumental will only be available on the double 12” vinyl release.

Whew!!! What a journey it has been, but we gotta end it with a short statement from Mr. Owens: “When writing Misty I thought about what beautiful warmth I felt when first meeting Charles and the Soul Clap family. [This record is] a reflection of you and yours my friend!!”